I’ve explained how New York City had a life of it’s own in my head. In early August, I visited there for the first time. After my first NYC taxi cab ride, we hit Central Park and were there for hours, despite the jet lag. After a good night’s sleep, we started our first full day in the city with a tour of the Intrepid and the Space Shuttle Enterprise. Next on the agenda was the full cruise (two and a half hours plus) around Manhattan. It’s an excellent way to get the big picture in one swell foop.

Pulling away from the dock you get a great view of the Intrepid at the next dock. (Enterprise is safely tucked away in that white building that’s on the far left side of the flight deck.)

If you didn’t realize that New York City was and still is a major United States seaport, this trip will quickly correct that. As we headed south on the Hudson River it was wall-to-wall docks.

On the other hand, docks servicing shipping container ships and oil tankers and so on tend to be smelly and dirty and no one wants that just across the street from the skyscrapers of Manhattan. The tankers and freighters load and unload elsewhere these days, which leaves the docks open for use by the mega-rich for their yachts. The piers become prime real estate to be used in some creative ways – this one is enclosed in gigantic nets and is a golf driving range.

Oh, and of course, we found the Empire State Building there in mid-town. More of that when we get there. (Be patient, it’s going to take a couple of months. I took a LOT of pictures and we had many exciting adventures.) 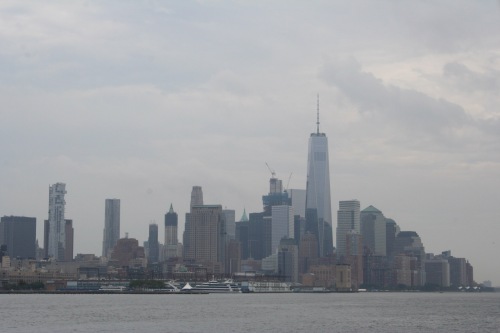 About fifteen minutes into the cruise we start to approach Lower Manhattan. The One World Trade Center Tower dominates the skyline. As for the weather, it stayed squally and damp, but not raining hard after we left Intrepid. Just enough to have me making sure that I kept all of the cameras in ziplock freezer bags to stay dry when I wasn’t using them. 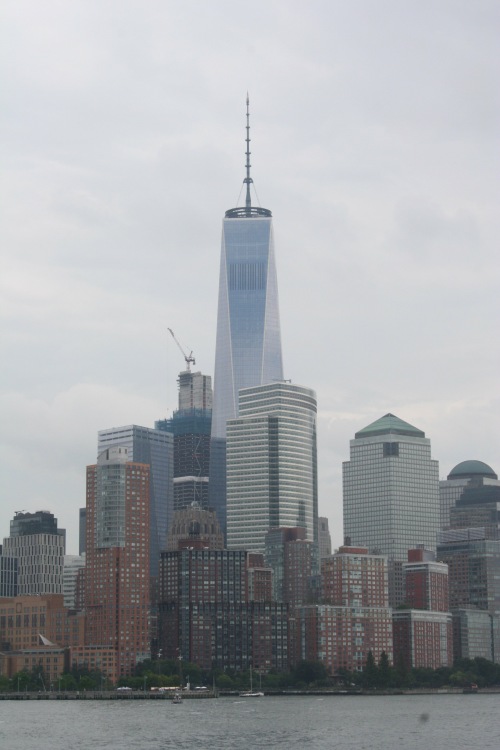 The design is spectacular with the opposing triangular faces all the way around. It’s 1,776 feet tall at the top of the spire. (They don’t do “subtle” real well in New York.) 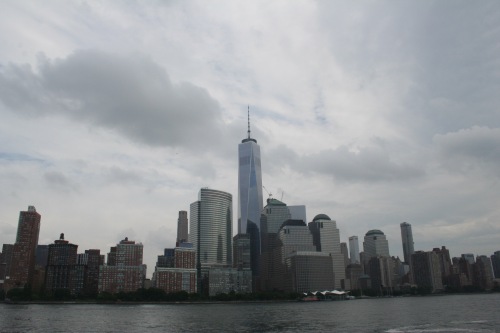 Passing by the southern tip of Manhattan, the cruise heads out into the Upper Bay. 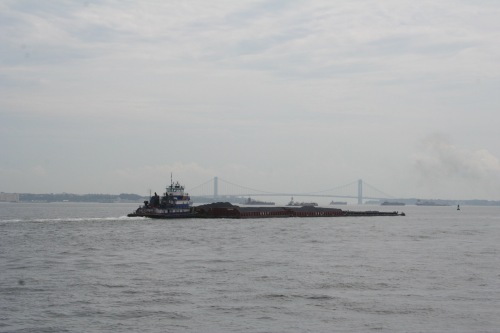 Looking to the south, the Verrazano-Narrows Bridge appeared out of the haze. I also found there to be a lot more ship traffic out in the bay than I had expected. I’m not sure why – perhaps it’s that here off the coast of Southern California you get the occasional mega-huge cruise ship but not much more. There are often dozens of freighters at anchor waiting their turn to unload, but they move in and out in a stately way, lumbering into port from Santa Monica Bay.

New York Harbor was bustling! There were some big ships moving around out there, many pushing barges. 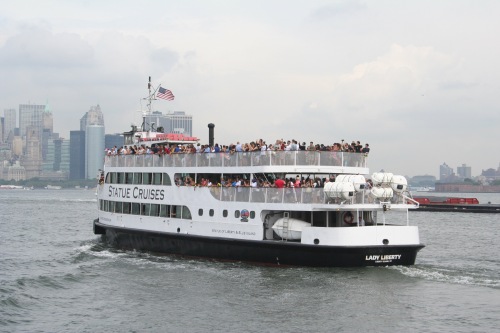 Of course, there was a steady stream of these out there, shuttling folks to and from a couple of famous islands out in the harbor. We got a decent view as we trundled past, but I’ll save the pictures for when we get to our trip out there on the following day.

Suffice it to say that it’s not just any old monument. I was surprised at how much I was affected by seeing her in person. 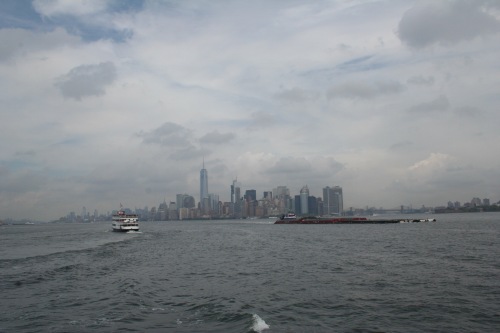 We paused for some nice distant views of Manhattan, then turned back to go up the far side, over on the right. The bit of land over on the far right is Brooklyn, and just above the barge you can see a bridge that some guy kept trying to sell me. (I didn’t buy it. He wanted a cash only deal.)