Spring had arrived (officially, TODAY!), at least for a couple of days. After one of the rainiest and coldest winters recorded in Los Angeles, followed by extremely windy conditions for a few days, we actually got a couple of relatively calm days this past weekend where it got up about 80°F. (More heavy rain, thunderstorms, chilly temps rolled in today, with more coming tonight, and tomorrow, and this weekend, and next week, and next weekend…) While it was nice and warm, I wandered out and noticed that the yard was responding to the warm up by coming to life, so I grabbed a camera. 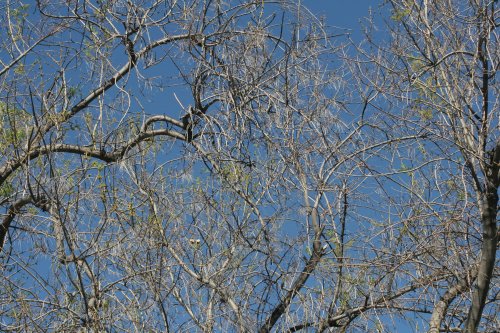 The centerpiece of the back yard (aside from the view) is this honkin’ huge tree with a couple of bird nests way up at the top. I have no idea what kind of tree it is. My Boy Scout days are pushing fifty years behind me and they were in Vermont, so if it isn’t a sugar maple, a fir tree, or poison ivy I don’t know it. Whatever it is, it lost all of its leaves and has been looking bare for three or four months. But…

…it too is starting to push green stuff out of the end of nearly every branch and twig. 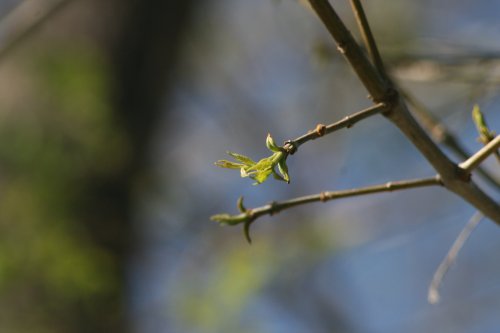 It’s interesting how everything here seems to explode straight out of the end of the twig, where the flowers on the other trees seemed to be cocked off to the side at 90°.

These are like parabolic antennas or umbrellas – after they have pushed straight out, then they spread and get maximum exposure to the light. It’s a photosynthesis thing!

This things going to be providing plenty of shade real soon. Which is a good thing!