I went out into the back yard (it was about 89°F – sorry to my friends in the sub-freezing climes) and spooked a lizard.

This is one of the “tree Freds” – they’re often found sunning themselves on the side of a large tree just off to the right in this view. I went out for something, Tree Fred felt that caution was in order, and he bolted for the bushes along the fence, seen behind him.

But he stopped to watch me. He was a bold lizard today.

I had time to go in and get my good camera with the telephoto lens and Tree Fred was still waiting.

I took a couple of pictures from across the yard, just after I came out onto the porch, then started slowly walking toward him, a couple steps at a time.

Every time I got closer I expected him to bolt, but he was a Bold Lizard! 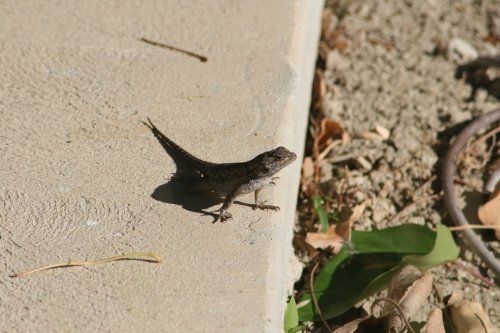 I was getting a lot of side eye, and I’m pretty sure he knew that he was much faster than I was. There was no doubt in anyone’s mind that he could make it into those bushes before I could blink, if he so chose. 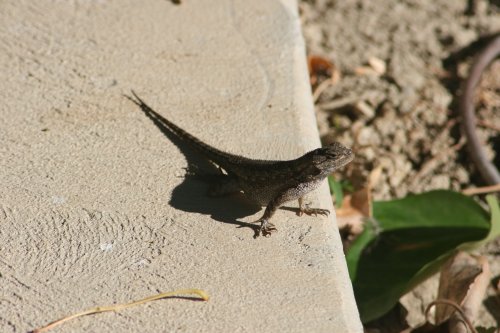 I finally got within about five feet of him, then backed off in respect for his ectothermic lifestyle. He had a nice, toasty spot on the sidewalk and who was I to deny him those solar photons? I promised to keep on taking any crickets that I found in the house and releasing them back into his bushes. I’m going to assume he appreciates it.