Because I’m still too irate to speak rationally about yesterday’s events (i.e., the attempted coup at the Capitol by the “President” and his cult) to speak without massive amounts of screaming and obscenities (which I prefer to keep off of this site and use on social media instead) I’ll instead blather on for a few seconds about something else that’s been catching my attention the last few days while my brain is trying to revolt and not hear any more horrors.

Now, one might think that given my preferred hair style, i.e.:

…and the way I accomplish it in these now nearly ten months of quarantine and lockdown: 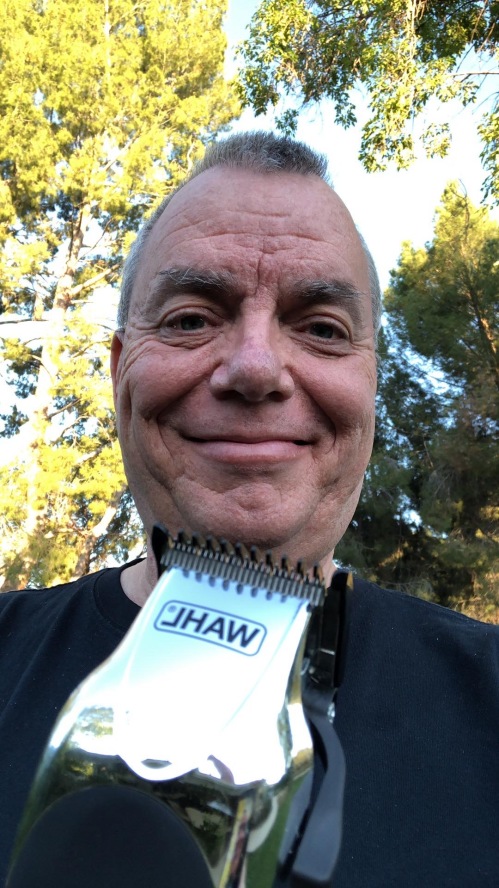 …that hair wouldn’t be that big of a deal. After all, how hard could it be to just buzz it down to fuzz? (“BUZZ FUZZ!!!” Sorry, Paul’s brain is experiencing issues…) You cut it all down to one uniform, short length and it all grows back and stays pretty uniform and then at some point you repeat the process.

But, what in hell am I talking about?

Well, first of all, let’s talk about the hair around my ears. (And you thought this was going to be boring!) That’s usually my number one indicator of when I need a new haircut since when it gets long enough it starts to tickle and bother me. Now, just a couple of weeks after a haircut, when I was very, very careful to buzz everything down to a uniform length, the hair above my right ear is long enough to be tickling and bugging me – but not my left ear or anywhere else. In fact, it’s still pretty short everywhere else.

Then there’s this SPOT up near the top of my head where out of nowhere in the last three or four days it’s had some kind of bizarre growth spurt and it’s about three times longer than anywhere else. I know for a fact that it was all cut when I last conned the clippers but now out of the blue it’s just almost freakishly long in this one little patch.

WHY? I thought that the pace of hair growth would be pretty uniform, but that’s apparently wrong. Or, again, conspiracy plus Universe equals insanity.

And don’t even get me started on my eyebrows. I believe it was John Scalzi who once referred to his as the “Thufir Hawat starter set.” That’s the track I’m on.

Is it an age thing? Am I doomed to spend the rest of my years unexpectedly sprouting in odd places?

Whatever. Maybe I’ll just start shaving it entirely again. I tried that once and found that it was bizarre (particularly the part down at the end, the incident with the towel) and too much work to maintain. But faced with this madness, it might be the lesser of two evils.

And why are there always only two evils?

Wasn’t this better than talking about politics?

One response to “Hair”