What’s Wrong With This Picture?

A few days ago I mentioned a YouTube webcam site called “Hundreds of Hummingbirds.” Normally during the day it looks like this: 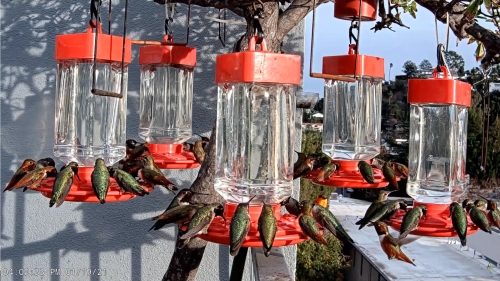 But I’ve noticed a couple of times that something’s wrong: 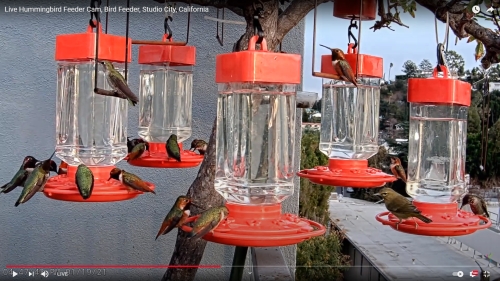 Over there on the right – that’s not a hummingbird. It’s a house finch, like the ones we watched build a nest, lay eggs, and raise fledglings last year.

I guess he figures if he can do the “carrier landing” he deserves a meal. Unlike the hummingbirds, which come in and hover to land, the finch comes in like a bat out of hell and just grabs on. Once in the area they’ll jump from feeder to feeder to feeder, each time going from hole to hole to hole. And I suspect due to the short, thick beak, it’s not getting any food at all since the holes are long and thin and designed for the hummingbird’s beak.

But they keep trying. I guess they figure if all of those other birds are there eating there must be something there to eat. Well… yes and no? Hope springs eternal – I see them there once or twice a day every day.

Speaking of hope springing… It’s about nine hours to go before the next era in American politics begins. Let’s hope that things go peacefully, smoothly, and we can get on with our lives.

One response to “What’s Wrong With This Picture?”