It’s getting near the end of the “season” for great ISS passes here. The high beta angle period has passed and after the next few days we’ll be moving back to mostly morning passes. Like, 04:00-ish morning. Uh, no thanks!

But for tonight, there was a spectacular, almost horizon-to-horizon pass, going almost through the zenith (87º maximum) and at mag -3.8.

The problem was that it was just a bit too early and too bright to be taking longer (3 or 4 second) exposures, and even one-second exposures would be bright and potentially overexposed. But taking shorter exposures, as we’ve learned, can overwhelm the older camera and memory cards, taking pictures faster than they can be saved.

I took a shot at it, with one-second exposures and about one-second pauses between photos. The end result came out great, heading from just before the zenith to the eastern horizon, although it looks a bit more like a dashed line than normal, with the gaps being the longer pauses between shots to give the camera time to keep up. 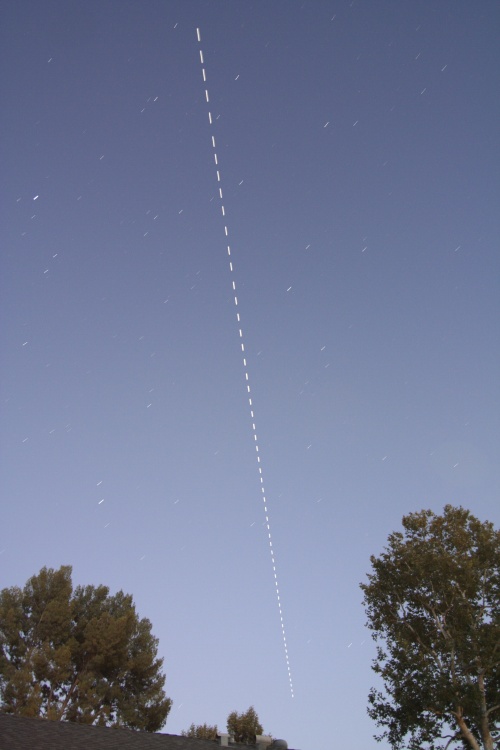 This is that wide angle, “light bucket” lens that I like so much, with an easy and almost perfect focus at infinity, so it looks clean and sharp. Later I went out when it was fully dark and played with what it would do in LA’s light polluted and slightly hazy skies, with interesting results. I’ll share those in the next couple of days after I get some time to go through them.