I was stressed today (taxes) so I took a long walk (3.62 miles) this evening, first to get some exercise, and secondly to get the tax payment envelopes to the post office.

In the process there were MANY lizards, almost all of them the six to eight inch long Western Fence Lizards. (Do a search for “lizard,” or “Fred,” or “Bubba” on this site. Pictures galore!) Along retaining walls, in driveways, on the sidewalk scuttling into the bushes as I approached, on the trunks of trees. Once you start looking for them and noticing them, they’re all over the place. Generally trying hard to be where you’re not.

Along a long stretch of sidewalk which was mostly covered in trash, weeds, and bone dry grass that’s ready to go up like a torch when a tossed cigarette butt hits it, I saw ahead of me a much larger lizard, obviously not a Western Fence Lizard, but a California Alligator Lizard. It was stretched out in a nice, sunny, warm spot on the sidewalk and I felt a little bad about disturbing it, but it was right in the middle of my path. But as I approached, it never budged.

As I went by (I was in a hurry, I was feeling the burn, I was still stressed over the taxes) I took a glance and it seemed healthy. No blood, had its tail (they tend to shed them if a predator grabs them by the tail) and all four legs, no obvious wounds.

On the way back about twenty minutes later I was on the lookout. And there it was, still. 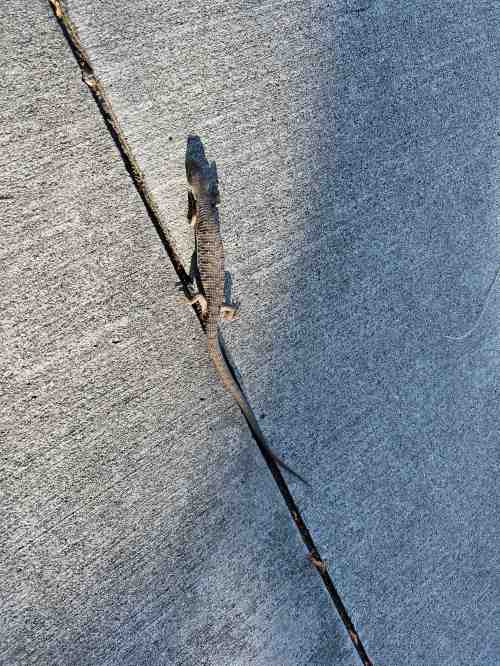 Despite its lack of obvious cause of death, it was 100% immobile, even when I was within inches of it. 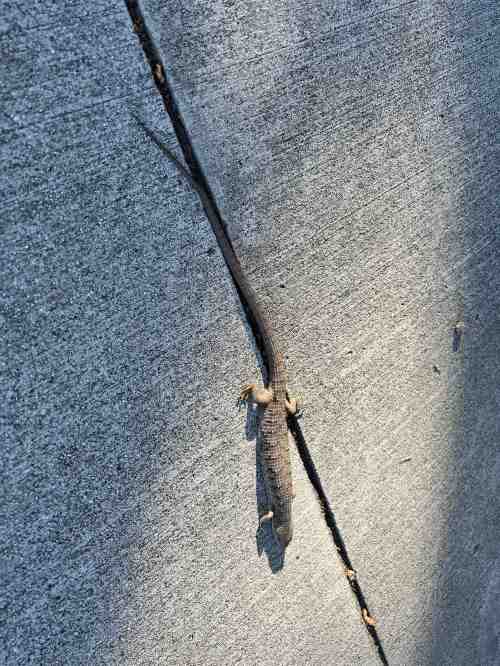 Given how fast these little dudes can move when spooked, I’m gonna stick with the “dead” prognosis. 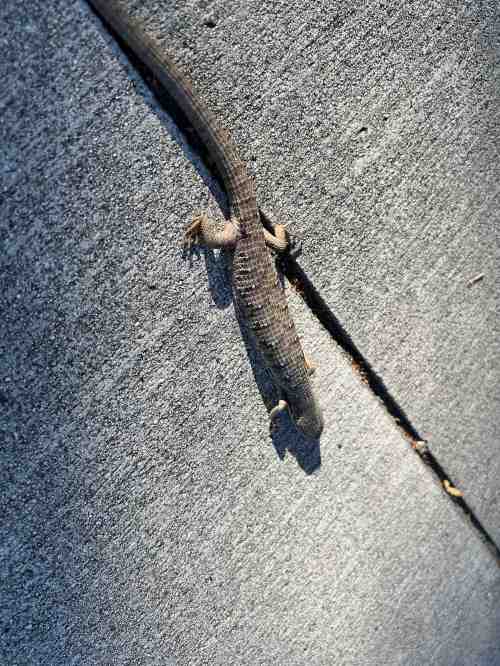 Nose to back legs it was about a foot long, with another foot from the back legs to the tip of the tail.

Looking around, there was an apartment building right there, lots of kids playing in the parking lot, lots of families, so I’m wondering if a cat didn’t catch and kill it. They’re known to do that a lot. The only thing that doesn’t fit that theory is that most cats won’t kill it, they’ll bring it into the house and release it. Go figure!

The other possibility is that it’s a fake lizard and there was a hidden film crew nearby for a reality TV show and they wanted to see what folks would do when they found a two foot long lizard in the middle of the sidewalk. Me? I took pictures of it! No mystery there.