Jessie gave us a bit of a scare this afternoon when she went walkabout while we were off doing errands. We had ended up coming home in two cars and when I got home I heard The Long-Suffering Wife out in the back yard calling for Jessie. The puppy princess was nowhere to be found. 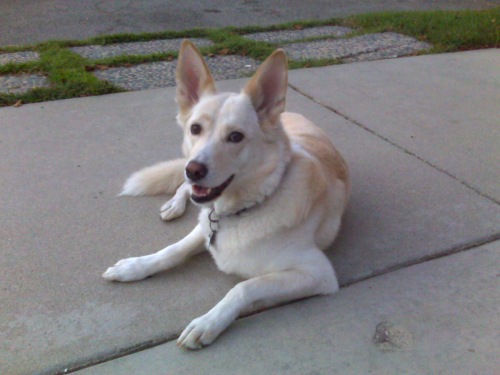 In the old days, when she was a younger pup, we had all kinds of issues with her being an escape artist. In particular there was an incident when she took off on one of the girls and was last seen heading for parts unknown. We did the whole thing where we were driving around the neighborhood until after dark looking for her and resigning ourselves to starting the calls to the local shelters and putting up “Lost Dog” posters the next morning. When we got up, we found her somehow in the back yard, wondering when breakfast was. She’s a smart dog.

For many years when we would all be at work and school for the day, we would find her out in the front yard when we got home even though we had left her locked up in the back yard. With the usual 6′ cinder block walls, we thought it was unlikely that she was jumping out. At least we thought it was unlikely until we caught her doing it. Repeatedly.

We ended up with a system where she would spend the day on a lead connected to a rope suspended about eight feet over the length of the backyard between two trees. She could run from end to end and had plenty of room to get to her food, water, and shade, but not enough slack to get tangled up into the bushes or to get to the wall to jump over.

We haven’t had to do that for a while. She’s about twelve and a half years old now and not quite as spry as she was as a pup. (Neither am I.) She can still take off like a bat out of hell when she sees a squirrel, but she also sometimes has to try a couple of times to get up onto the bed, so we figure her wall jumping days are behind her. (So are mine.)

When we couldn’t find her in the back yard today, we checked the gate and found it unlatched. I suspect that the gardeners didn’t latch it tight when they were here yesterday afternoon and I hadn’t double checked it, so Jessie just had to push on it to get it to swing open. We had gone on our errands and she had taken the opportunity to go looking for adventure.

I figured that I would start driving around to look for her, checking the few local parks that we walk her to and so on. I didn’t think she would have gone too far. But just as I opened the front door, she trotted across the yard and into the house, looking for snacks.

A few minutes later a neighbor and her daughter checked in to make sure that she was ours and had gotten home safely. They said that they had seen her just going around the block a couple of times but she always came back to our yard to rest (and guard the house from the front porch) before going off on another trip. No worries, all’s well that ends well.

Tomorrow I’ll have to remember to adjust and oil the gate so it closes on its own. At least we know that Jessie’s still a smart dog when it comes to getting home. Home is where all of the food is and she’s really fond of her food!

One response to “Puppy Gone Walkabout”