Scientific American And The Epic Fail

One of the more emotionally satisfying memories I have from my childhood involves Scientific American magazine. I was a voracious reader, wanted to be an astronaut, and didn’t have a whole lot of reading material or resources. In grade school I attended a private, Catholic school, and while there was a library, it had serious limitations regarding what I wanted to be reading. We didn’t have a whole lot of reading material in our home, other than a set of World Book and Childcraft encyclopedias. I had read them all cover-to-cover by third grade or so.

Then I found out that my father subscribed to a magnificent magazine called “Scientific American”. He had an engineering degree, and he told me that he liked Scientific American because it kept him up to date on a wide variety of areas of science and engineering. It was reliable, timely, and written at a higher technical and vocabulary level than the popular news magazines like Time or Life. You had to have a brain and some education to read and understand it, and it didn’t talk down to its readers. Not only did he subscribe, but he had stashed away several years’ worth of back issues. As long as I was careful and didn’t get them dirty or torn, I was allowed to read them.

Yeah, that was pretty cool.

Here was a source of real, actual grown-up science stuff, and not the pap that the other magazines had. Granted, Life magazine had a lot of big, color pictures from NASA and those were fantastic, but Scientific American had the knowledge and the science behind the pictures.

Not surprisingly, when I got out on my own, one of the first magazine subscriptions I got was Scientific American. There were years when I was putting myself through college when I might be looking for couch change for the rent, gas, utilities, insurance, tuition, or food, but I never let that subscription lapse.

Today, I still get the print edition and, like my father, I still keep the back issues. In fact, after my father passed away ten years ago, one of his possessions that I got which I prize the most was the boxes and boxes of Scientific American magazines from the 1960’s. Going through those boxes I can still identify them and remember articles just from the cover illustrations. It’s like a time machine that takes me back to a happy place.

I’m baffled and terribly disappointed by what has happened over the last twenty-four hours with Scientific American’s blog website.

In summary, Dr. Danielle N. Lee, Ph.D., is a noted biologist who writes a Scientific American blog, The Urban Scientist. Yesterday she reported an exchange that almost defies belief in its foulness, complete lack of professionalism, and misogyny. In a brief exchange of emails with someone who claimed to represent Biology-Online.org, she was asked to contribute articles for free, a request which she politely declined. The response was, “Because we don’t pay for blog entries? Are you an urban scientist or an urban whore?”

Understandably shocked and outraged by this response, Dr. Lee wrote a blog article reporting what had happened and posted it to her site. She also started telling her friends and fellow bloggers about what had happened. At first, people started to realize that Biology-Online.org has some sort of marketing and advertising relationship with the Scientific American blogging site. Secondly, people noticed that Dr. Lee’s blog article wasn’t showing up on her Scientific American site. When inquiries were made, it was found that the article had been deleted by Scientific American.  The justification for the deletion came in a tweet (here, including the repsonses) from Mariette DiChristina, Scientific American’s Editor in Chief and Senior VP, who said, “@sciam is a publication for discovering science. The post was not appropriate for this area & was therefore removed.”

While the editorial leadership at Scientific American appears to have completely dropped the ball, the blogosphere reacted quickly. Dr. Lee’s friend and fellow blogger, Isis the Scientist, reposted the deleted article and started spreading the word. Dr. Isis followed it up with a second article today. The reaction also included many other bloggers who write on the Scientific American blogging site. As of this evening, Janet D. Stemwedel, Dana Hunter (here and here), and Kate Clancy have all posted articles that are quite pointedly not about “discovering science” but instead are wondering what the major malfunction is at Scientific American.

Other prominent bloggers have weighed in, including Maryn McKenna, Anne Jefferson, David Wescott, Sean Carroll, Joshua Drew, and Greg Laden. John Scalzi commented on it on Twitter, and the entire conversation generated in that thread is quite enlightening. My two cents worth on Twitter was: 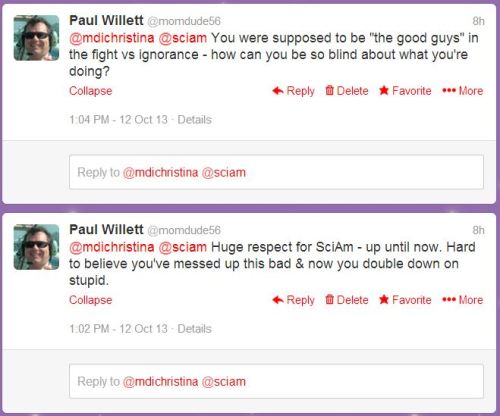 As someone pointed out, even Buzzfeed is calling Scientific American to task for what they’ve done. Isn’t that a bit like the New York Times screwing up and being chewed out by the National Enquirer?

This is not rocket science. The proper response to seeing an employee or associate treating anyone with a lack of respect is to say, “Stop”.

When an employee or associate treats a woman like Dr. Lee was treated, the appropriate response starts with, “STOP! You are relieved of your duties effective immediately. We will discuss your future or lack of one with this organization later. We offer our utmost and sincere apologies to Dr. Lee. This despicable offense should never have happened. We will immediately begin a review of all corporate policies and procedures to make sure that all company personnel understand that such behavior toward anyone is completely unacceptable and that anyone displaying such behavior will be held responsible for their actions.”

Notice that deleting her complaint in an attempt to shut her up isn’t part of that response? Nor is coming up with a completely false and nonsensical excuse for deleting her account. Nor is then going silent.

We’ve seen this kind of unacceptable behavior over and over with politicians, both the disrespectful treatment of women and the ignorant belief that it can be swept under the rug once exposed to the light of day. (Can you say “Anthony Weiner”? Sure, I knew you could.) Politicians, unfortunately, are not expected to be tech savvy or internet savvy. (That’s so sad in its own right, but that’s a discussion for another day.)

While this kind of behavior has gone on (literally) forever, we’re supposed to be doing better in 2013. As a society, we’re supposed to now be more mature, more educated, more intelligent, more empathetic, more understanding, more responsible, and more civilized than we have been in the past. Yet in the past weeks and months there have been far, far too many examples of inexcusable behavior toward women in the tech industry, in science, in academia, in publishing, in SFF fandom, and in every aspect of everyday life.

When will people get it through their heads that this sort of behavior IS NOT ACCEPTABLE?

It’s tempting to say, “It’s a holiday weekend, this hit the fan late on Friday, so for the moment only, let’s give Scientific American the benefit of the doubt. We’ll wait until Tuesday and see what they do to make this right.” Tempting, but I’m going to resist that temptation. Unless the entire organization management is off in a retreat, sealed in a cave in the Pyrenees with no outside contact with the world, they must surely be aware of what’s going on. When you make a mistake this big, you can either hunker down and hope it blows over (a truly terrible strategy and proof that you shouldn’t be in charge of anything) or you can get on top of it by immediately starting to make things right. The problem has ballooned out of control over the holiday weekend — surely the corrections could be started in the same time frame.

One way or the other, the clock is ticking.

Your move, Scientific American. One hundred and sixty-eight years of excellence hangs in the balance.

Would you like to admit that you screwed up big time, apologize sincerely and honestly, and tell us what you’re going to do to make things right and keep them that way? Or would you like that 168-year-old reputation to be history?

One response to “Scientific American And The Epic Fail”