The alarm clock rings. I rise, still better than half asleep, stagger into the bathroom to start the day the same way that most of us start it. I lift the lid and seat on the toilet…

I’ve mentioned from time to time that we have something of a menagerie her in our little slice of Heaven along the Rama-lama-ding-dong River in the heart of suburban Los Angeles, right?

Sometimes the critters want to share spaces with us. The rabbits are under the house sometimes. The raccoons are on the roof almost every night. The lizards live in the bushes all around the house.

The cute little lizards. The “Freds.” Mini-Fred. Micro-Fred. Clinger-Fred. Mega-Fred. Plain old Fred. In the bushes. On the sidewalk. Sunning on rocks.

Some are less tiny:

Some are pretty decent sized: 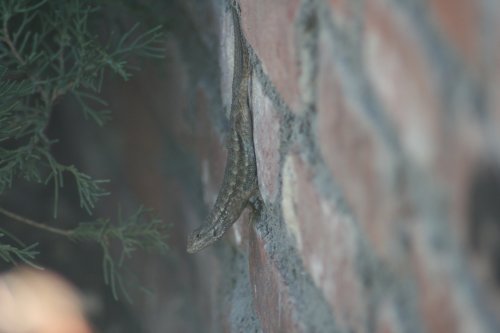 And now there’s the demon fucking monster from hell that I found lounging in the toilet this morning when I lifted the lid while half asleep: 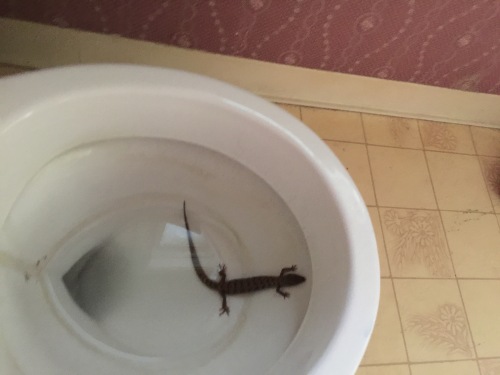 There were a number of interesting lessons learned from this encounter.

In closing, I would remind everyone that incidents such as this are extremely rare. (It says so, right there on the internet!) Despite my first thoughts, a little thinking about the problem convinces me that FredZilla doesn’t live down in the sewers. There’s nothing else down there for him to eat, and there’s really, REALLY not enough of whatever might be edible down there to allow him to grow this large. There’s just not a sufficient ecosystem.

In doing a bit of research it seems that he almost certainly got into the sewer system by accident, probably by either falling down into one of the clean-out traps that they put in when they completely rebuilt our sewer lines last year (remind me to check and make sure the caps on those traps are all on tightly) or falling down into one of the sewer roof vents (a slightly more common source of problems). Either way, once into the sewers, one of the only ways out is to climb back up through a toilet.

On the other hand, if it’s all right with everyone else, I’ll be turning on the lights and doing a precautionary lift of the lid to check for visitors every time I use the facilities for, say, the next couple of days? Weeks? Years? Lifetimes?