It’s that time of year when orbital mechanics and equatorial tilt align to give SoCal a whole week or two of really spectacular ISS passes in the evening. Naturally, despite the time pressure and borderline panic involved with packing and moving out, I’m out taking pictures. And starting to learn a bit more about how to do it better each time. 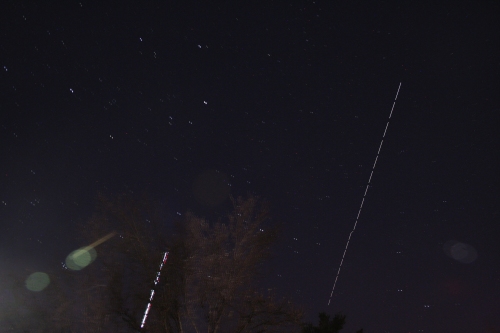 Yesterday, April 10th, there was one of the best passes I’ve seen in a couple of years. Rising out of the northwest headed straight toward (almost) the zenith, being chased by a Southwest Air 737 going into Burbank. (Four-second exposures, combined using StarStax 0.70.)

Lesson to learn – keep the tripod steady. That’s why the stars are doubled up and there’s that little jog in the ISS’ path. 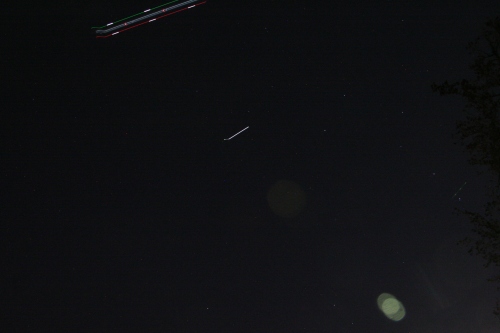 A single frame as ISS passed nearly overhead with that 737 having finally caught up. Again, you can see that there was vibration in the camera due to the tripod not being secure. The rest of the photos in this sequence were worse, so there was little point in stacking them. 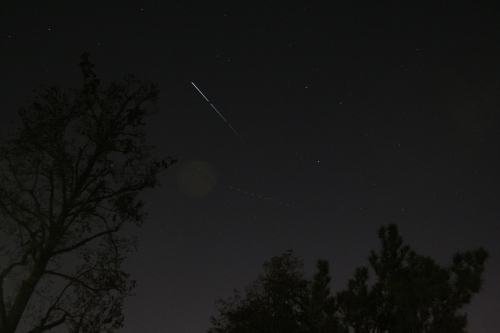 But the best of all, a picture I truly love! Just three frames, four seconds each, but you can see the ISS crossing into night above us. Throughout all of these pictures it’s been nice and dark here on the ground, but the ISS, 250 miles up, has been in bright sunlight. This makes it easy to see, but eventually it will go into the Earth’s shadow, or as we techie folks call it, “night.”

Looking at those frames (go ahead, click on the photo, blow it up nice and big on your monitor) you can see that not only does the ISS image get dimmer but it also turns red and orange as it quickly flies through the “sunset” rays of the setting sun. It’s just like our sunsets on the ground, but much faster. 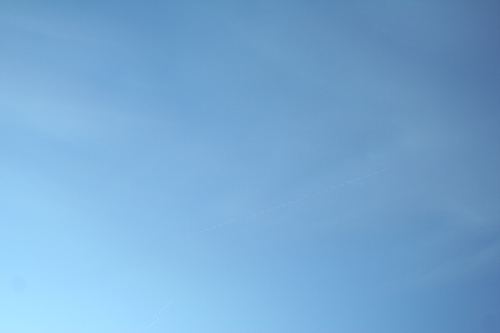 Tonight (April 11th) there were a couple of new issues. Some I can control, some I can’t.

First of all, obviously, were the high clouds. Nothing to be done about that. But the other big issue is the earlier hour. This pass was over an hour earlier in the evening than yesterdays, so the sky was much brighter. I had to adjust.

Because of the whole moving thing I was short on time and just took a WAG (Wild Ass Guess) on the exposure. If the dark sky exposures were four seconds, maybe one second would work?

Well, not a terrible WAG, but next time I might want to go down to 3/4 second or even 1/2 second. In this image you can see the ISS, but the contrast between it and the background sky is much less distinct. (And I was up at the park instead of in my front yard, so the setup time on the tripod was even shorter and obviously less successful.) 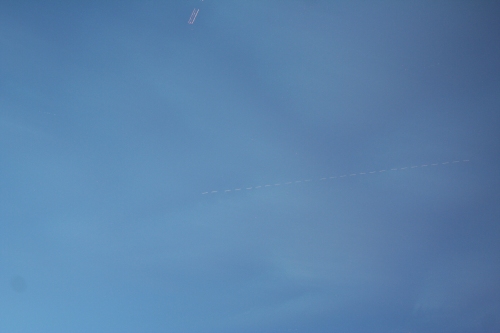 Once out of the worst of the haze down near the horizon the contrast got better. The other thing you notice with shooting and stacking a series of one second photos vs a series of four second photos is that the gap in between the images is a MUCH higher percentage of the total time. It looks like the reaction time to shoot the next photo is almost a second itself. In addition, pushing the button manually like that causes even more vibration – next time I’ll use the remote. 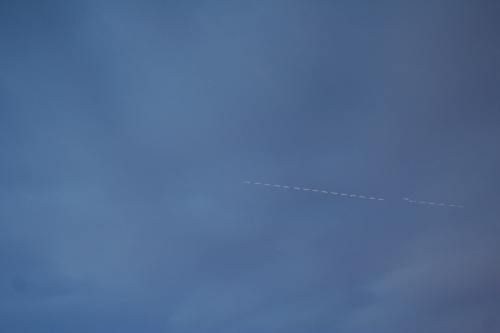 The other issue with hitting the button on the camera manually is that it’s easy to get out of sync and miss your timing, leaving a big gap in the sequence. 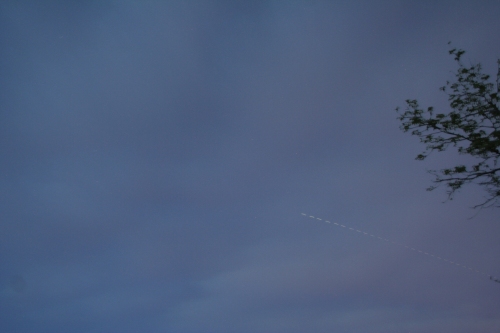 Heading back toward the eastern horizon, ISS again disappeared into heavier haze and muck.

The other thing that’s truly notable in looking at the four images side-by-side is how much darker it got in the five minutes or so between the start of the sequence and the end. I wouldn’t have thought in advance that it would be so noticeable.

Despite the so-so outcome of the images, the pass itself was lovely to watch with the naked eye.

Remember, to see the ISS in your sky (it’s really simple, you just need to know when and where to look) go to one of the NASA sites that can tell you, or better yet, go to heavens-above.com. Remember to put your exact location in the box on the upper right to make sure you’re seeing passes and maps displayed for your location.