During dinner there were two mockingbirds out in the back yard making quite a ruckus. I thought that it might be a mating or territorial thing. I grabbed the camera and headed outside. And noticed something in the tree on the hillside just below our back yard…

She is spectacular! A Great Horned Owl.

I was moving slowly, not wanting to spook her – every time I moved that head would swivel, but the body never twitched.

She was sitting in this one patch of sun as the sun set behind the house in back of us, her feathers illuminated perfectly, her “horns” making her easy to identify. (Well, that and the fact that I’ve heard them ever since we moved in here.)

It’s truly astonishing how far around that head can swivel, probably 270° or more!

I kept shifting toward the right and closer to the edge. By this time I was only about fifteen feet from her. And then… 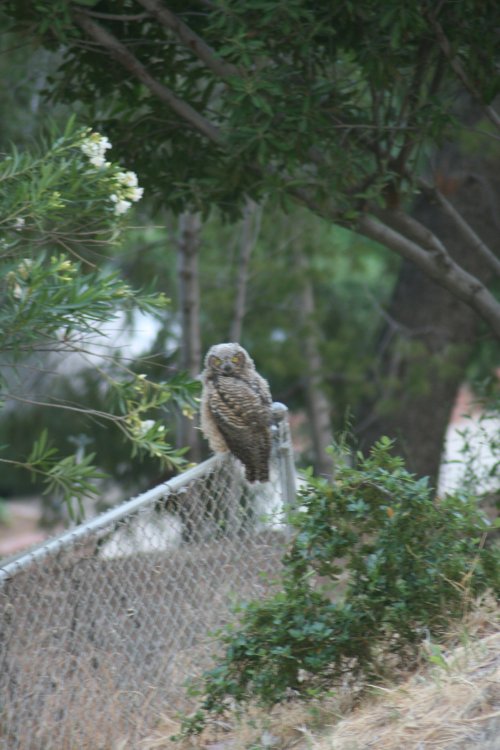 …I saw the other one! (I might have squeeeed just a little bit.) At first I thought it was just a rug or coat or something thrown across the fence. THEN THE HEAD SWIVELED AROUND TO LOOK AT ME.

I had heard the male hooting a couple times while I was out there. I’ve heard them calling back and forth many times and when I’ve done some research it seems the call of the male is deeper, more bass. That was his call.

I’m guessing that this is the male and the one up where I could see her was the female. In part it’s the size difference, but also the calls. This one was about fifty feet away and down in the shade, where it was hard to get a good picture as it was getting dark.

I’m also struck by how different his coloration seems. Might be the lighting. (Might not be – see the picture below of the female in this same spot a few minutes later.) 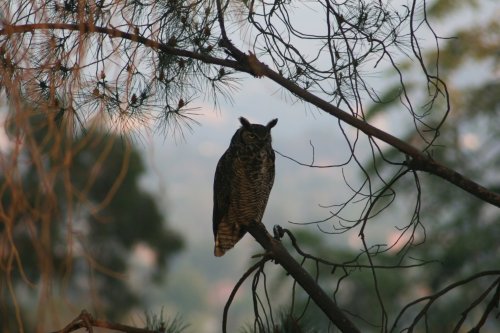 The mockingbirds were still out there, taking every opportunity to dive bomb her. At one point she hopped down onto another branch. 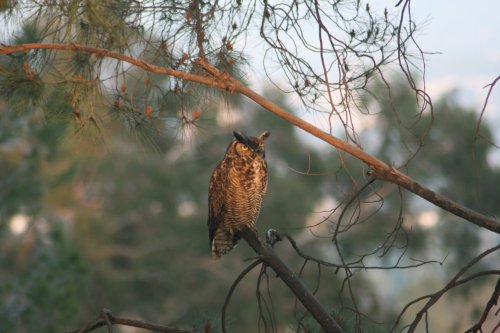 From there, just as the sun was setting, I got a good view of the feathers on her breast and tail.

I was lucky enough to be ready when another mockingbird strafing run came by and she hopped down another branch. 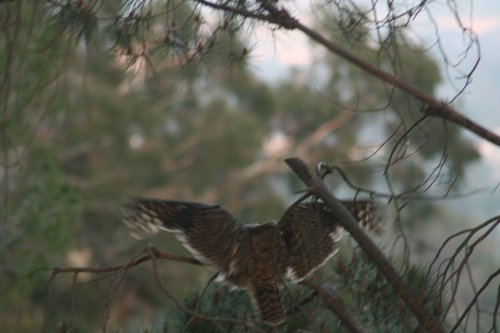 That’s a large wingspan! The white tips to all of her feathers when deployed are quite a sight.

The male finally got sick of the mockingbirds and flew off down the hill. I saw him a few time gliding from tree to tree, but the female soon went down and took his spot on that fence corner. (Compare her size to the male perched at the same spot a few pictures above.)

As it got dark I watched her and listened to them occasionally calling back and forth. The mockingbirds continued to be pissy and loud, but their attacks were all no-hitters. Meanwhile, a few straggler butterflies were wandering by, the hummingbirds were hitting on the feeders and buzzing the ice plant flowers near me, and the house finches were flitting all over the bushes for a last snack for the babies back in the nest as it got dark.

Not bad for the middle of a megalopolis!!