There’s plenty of sun to be gotten – it was fortunately only up to about 102° today. I practically need a sweatshirt.

Out in the front yard, two of the new baby lizards were working on their tans.

This guy couldn’t decide if I was threatening enough to cause him to give up this toasty, warm spot. 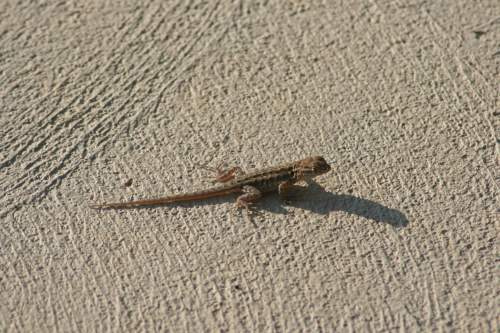 He eventually spun around to face the bushes so he could make a quick escape if he had to, but I, of course, let him be.

This tinier guy was right outside the front door and spooked as soon as I opened it.

I didn’t move other than to close the door behind me (an A/C 76° inside, a lizard-friendly 100+° outside, you do the math) and take pictures.

That was okay for a minute, but as soon as I tried to lean down to get closer or squat to get to his level, he went from zero to Warp Factor 8 in about two seconds.

Probably a good move – I’ve seen the remnants of at least two of his siblings out there already. Between the crows, hawks, mockingbirds, and whatever omnivorous predators are on the prowl, there are slow lizards and there are old lizards, but there are no old, slow lizards.

One response to “Baby Lizards Getting Sun”