It’s been a really, REALLY busy time at work (budgeting, Board meetings coming up, quarterly closings, all of those other joys of running an eight-figure accounting department) so in the interest of brevity, a few days ago I posted a “no context for you” picture and teased that there was a mystery because of something that wasn’t there.

(By the way, yesterday was my work-anniversary, one year with the ALS Golden West Chapter. For those who might conceivably be interested, while it’s almost always “really, REALLY busy” and that comes along with some “aggressive” deadlines and an “interesting” workload, I’m truly enjoying working there. I’m part of a wonderful team, we get an amazing amount of work done to help people who need it as well as funding research, my boss is the best I’ve ever worked for, and I’m very glad to be there.)

Then, the next day, I posted some pictures with a hint that it might be related to the mystery.

So here’s the mystery.

Two Sundays ago, after doing the usual “get groceries and pick up breakfast” routine, I noticed something out in the back yard. I was looking out the kitchen window as I am wont to do (it’s a nice view!) and there was something out there that hadn’t been there on Saturday. In fact, I was trying to figure out if I remembered seeing it earlier on Sunday morning, and I couldn’t remember seeing it. So, what was it and where did it come from?

First thought was that it might be a dead critter – god knows we get enough of them around alive, some of them might meet their fate out there. But it wasn’t.

Upon seeing it up close, I wondered if it might be something left by the gardeners, who are fighting an infestation of gophers that are ripping up the yard.

Did they fill something with bait or poison and drop it down the hole and the gophers just kicked it back up? Probably not, since this was a little big for that.

It’s bigger than a baseball, but smaller than a softball. It’s very hard rubber or some kind of synthetic material. There’s a hole going through it, and there was something plugging the hole in the center.

The stuff inside looked like a piece of granola bar or candy. Which made me think that this might be a dog toy or something.

While that might make sense as to its nature, how it got here was a mystery. The neighbor on one side has a little yapper dog, but everyone in that household is elderly and we almost never see them out, let alone out playing with the dog. I didn’t see this coming over the fence by accident from that direction.

Down the hill is a younger couple with a big, younger dog so it might be theirs, but again, how did it get up here? It’s a very steep hillside, multiple fences, covered with pine trees and debris (and I don’t even want to think about how many rattlesnakes), a good 60 to 70 yards from their yard up to ours. In my youth I might have been able to chuck this thing up that hill, but only after multiple deliberate tries. It wouldn’t be getting up here by accident.

My thought at the time, which I didn’t think to try to verify at the time, was that it might be a “Kong” dog toy, designed to have a dog treat stuffed into the middle and being semi-indestructible so that big dogs can go nuts on it to get the treat out and not destroy the toy. In processing this last picture for this post, I noticed the writing on the ball. If you flip it and enhance (think of me as Harrison Ford in “Blade Runner…”): 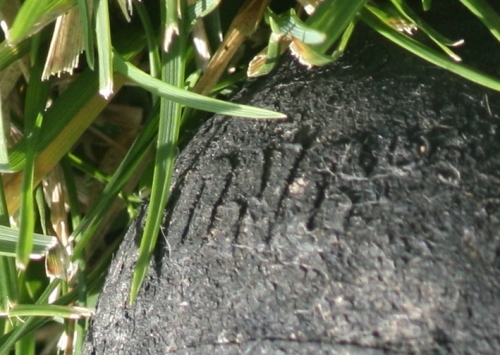 Yep, it’s a Kong ball. But how did it get here?

With all of that in mind, look at that “no context for you” mystery picture, taken on Monday morning, the next day:

The gopher holes are still there, as is the grass. The Kong ball is gone.

No one had been out in the back yard to my knowledge. The backyard gates were all locked. I had just left the ball there. So where had it gone?

First thoughts were that it might have actually been one of the neighbors, either climbing that steep hill while climbing over those fences (and then going back down) or else the octogenarians were climbing over the bushes and chain link fence on the side and retrieving it for the little yapper dog. Both were unlikely at best – why wouldn’t they just knock and ask for their dog toy back if somehow it landed here by mistake?

None of it made sense.

Then, a couple of days later, The Long-Suffering Wife reported that she had seen something weird in the back yard. A big squirrel had been other there, carrying some sort of big black ball around in its mouth. It had run across the lawn and headed down into the trees.

I think we have our suspect!

I’ll bet that there’s a thief squirrel in the neighborhood who grabbed that Kong ball out of someone’s back yard and carried it up to ours. It might be from the folks down the hill from us, but there are plenty of other folks with dogs around. It could have come from any of them within a block or so. The squirrel giveth on Sunday, and the squirrel taketh away Monday morning. But it’s still working on that treat, not going to be happy until it gets it all, and that may take a few days.

I don’t know if that’s a “mystery solved,” but it’s plausible enough so that I’m not going to be losing any more sleep about it!