It was the first sunny and semi-warm day in a few and I noticed that the big lizard that hangs out under the car was out catching a few rays. 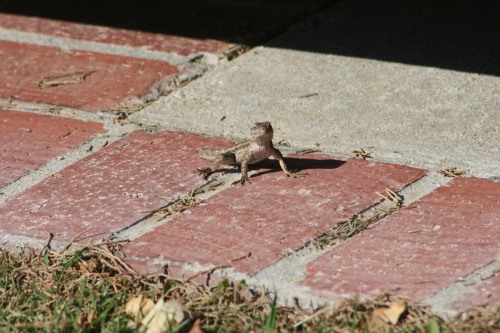 The usual attitude, and as I’ve mentioned before, this one tolerates my presence and doesn’t bolt at the first sight of me, so I can often get fairly close, within five or six feet.

Today there’s an immediate problem visible – our big dude (or dudette) has lost his tail!

He seems none the worse for wear, and it’s a known fact that they’ll shed their tails if captured, so he must have had a “close encounter.’ 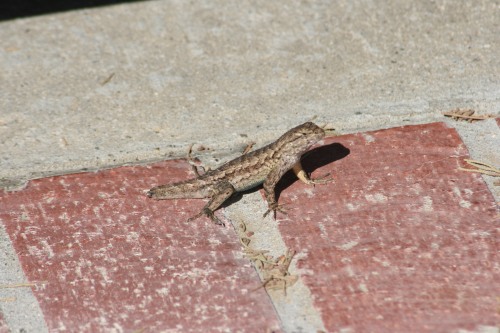 Just as interesting, however, once I looked at the pictures and blew them up on the screen (as you can do by clicking on the image) is that his belly has started to turn bright green!

Blow up this picture and the second one, and compare to the pictures here and here. No sign of that green streak on the belly.

Maybe it’s a coincidence that the color change is happening while the tail has been shed, maybe not. Maybe the two are related, maybe not.

But it will be neat to watch as he (or she) re-grows her tail. It will also be cool to see if there’s a slightly different scaling pattern on the new tail. (I’ve seen that before.)

Assuming he (or she) doesn’t get eaten in the meantime. Let’s hope not, I like this little guy. We have some really great conversations when I go out to get the mail or bring in the trash barrels.

One response to “Something’s Missing!”