I’m only semi-functional tonight – it’s been a lot of days of work in a row, and there’s another big thing kicking off this week, so there are few neurons to spare.

But one thing that’s a great diversion for a few minutes here or there when I need a break is watching all of the videos from the volcanic eruption in southwest Iceland.

It started on March 19th, with a mid-sized eruption. Lots of lava, but no huge ash clouds like the eruption a few years back in northern Iceland that shut down air traffic to and from Europe for weeks. No toxic gas emissions that could kill whole towns or groups of nearby spectators and scientists, so the scientists and spectators came in droves.

Then, after a few weeks, a series of smaller fissures started opening up along a line to the northeast. Most of these petered out, but one cinder cone started growing and growing and has now become the main vent. For a while there were spectacular fountains of lava, but these have died down a little bit and been replaced with little surges of lava ever ten minutes or so. Every ten minutes or so 24/7 for weeks, and the valley that all of these vents are in has finally filled.

A couple weeks ago the valley overflowed down into a canyon and started filling up a small valley below, and some time in the last couple of days a second spot overflowed in a HUGE push and now that lower valley is threatening to overflow. Once that happens it’s only a half-mile or so down the hill to the ocean, cutting the Southern Ring Road in the process.

There are six or seven or so cameras set up, all streaming online 24/7. My favorite site is a combination of four screens, one with a map that’s updated every day, the other three cycling through five or six different cameras: 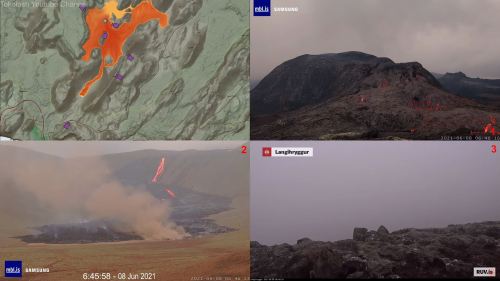 There are lots of videos on YouTube showing time lapses and other great events through the whole twelve week event so far, with no end in sight.

Like the drones that keep flying over and suffering the consequences of density altitude:

THE FLOOR IS LAVA!

No, really… Be careful out there.

One response to “Watch The Iceland Volcano Continue To Erupt”