Item The First: The “Odds & Sods” articles aren’t really meant to only be a Sunday thing – they’re just sort of turning out that way for now. Just so you know – they can pop up out of nowhere any time, any day, and rock your world! (Especially on days when I’ve got a lot of little items to rant about instead of one big rant.)

Item The Second: Fifty years ago today, on June 16, 1963, the first woman went into space. Valentina Tereshkova was the first woman to leave the planet, orbiting the Earth forty-eight times in three days, giving her more experience in space than the entire US astronaut corp combined at that point.

It was twenty years and two days later (so celebrate again on Tuesday!) when Sally Ride became the first American to go into space.

As of this moment there are two women in space, American Karen Nyberg on the ISS and Chinese astronaut Wang Yaping.

Item The Third: We’re back home at last from the two-week long graduation tour to Virginia and Northern California. More thoughts and pictures and stories to follow (can’t shut me up!) but for now a bit of normal routine would be nice. Tomorrow we’ll get the dog back from “the spa”, for the next month or so I’ll be forced to pet the cat constantly since she’s not fond of “solitary” when we leave

Most importantly, in the morning we’ll have to hit the grocery store. In the weeks leading up to these trips we did a fantastic job of buying only groceries that we would need before we left to limit waste and what we would have to toss when we got back.

As a result, we now have one apple (which I picked up at the Admiral’s Club in LAX, carried to Virginia, carried all around Virginia, brought back to California from Virginia, took up to Davis, and have now brought BACK from Davis), some granola bars, a couple of Diet Cokes, and one serving of Cheerios.

It could get ugly here in the morning.

Item The Fourth: The birthday balloon is finally really, REALLY on it’s last legs, a full ninety days after my birthday. No need to alert either NASA or Goodyear. On Thursday, just before we left for Davis, it was just about neutrally buoyant with the original foot or so of yellow string attached. 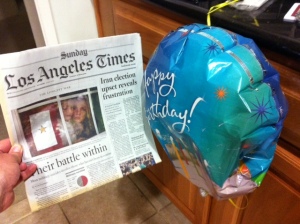 Still, that’s gotta be the best balloon I’ve ever gotten!