We have multiple raccoon living in our neighborhood. About a year ago we found two of them living occasionally on our roof under an overhang where there’s a bit of shade and shelter. For the most part they’re not much of a bother so we let them be.

We’ve named them “Rocky” and “Raquel”.

A half-hour ago I let the dog out into the back yard (she’s still re-exploring everything after her two weeks at the kennel) and she immediately tore off into the bushes behind the empty “in-ground hot tub” (I don’t know if it’s a Jacuzzi ® or not), barking like a demon. This is known as “a bad sign“.

I could hear quite a ruckus in the bushes, growling, barking, squealing, so I hollered at Jessie until she came out, completely “poofed” and in battle mode. I was pretty sure what the issue was, so I put her inside, grabbed a camera, and carefully approached the BBQ and hot tub area.

In the dry, empty hot tub, was this:

Rocky & Raquel have been busy!

As I approached the area I could hear this little girl squealing and crying like there was no tomorrow. And I could hear answering cries from the big, dense pine trees next to the hot tub, so it was clear that help was near by. Raquel was my concern since I didn’t believe that she would assume that I was harmless. (Fortunately I had grabbed the camera with the big telephoto lens, so I was about ten feet away.)

Out of the tree came Raquel (apparently still lactating):

“And just who the hell are YOU?!” that look says. (“Me? I’m the guy who’s going to run like hell for the front yard, screaming like a little girl, if you take one step toward me.”)

“I’m glad that you’re keeping on eye on the camera dude, but I’m not quite big enough to make it out on my own.” 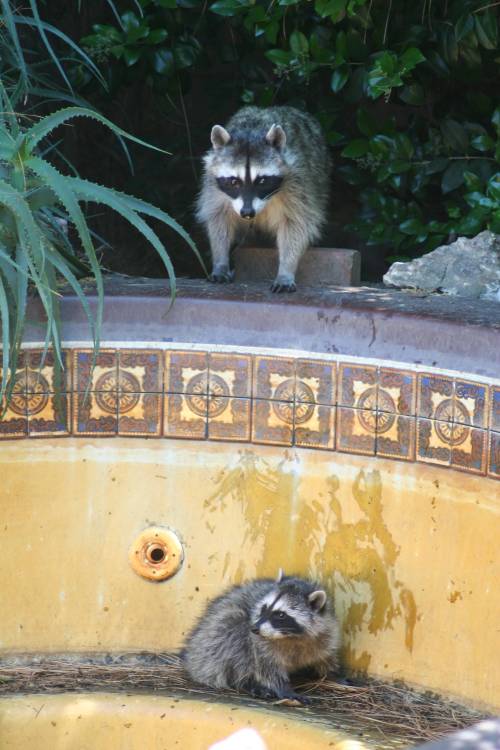 The sibling’s arrival has NOT helped the situation. The one up top is saying, “You are in soooooooo much trouble when Dad hears about this!”, while the one below is saying, “At least I didn’t get chased up a tree by that woosie white dog!” Raquel would like them to stop arguing and get focused on the problem at hand. (I know that this is how the conversation went because I have seven brothers and sisters, and my mother had to put up with this shit for decades.) 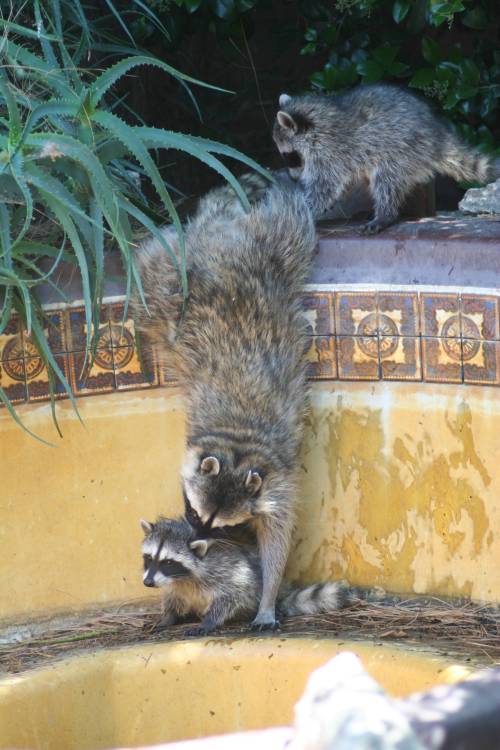 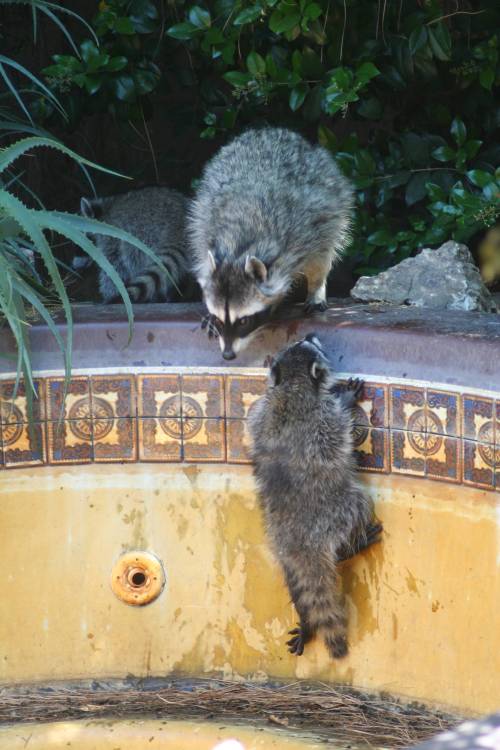 …but no cigar. Still stuck. Sibling is bored and not helping.

“Let me grab you from the back!” Sibling is finally being useful, serving as lookout in case that camera dude gets any funny ideas. 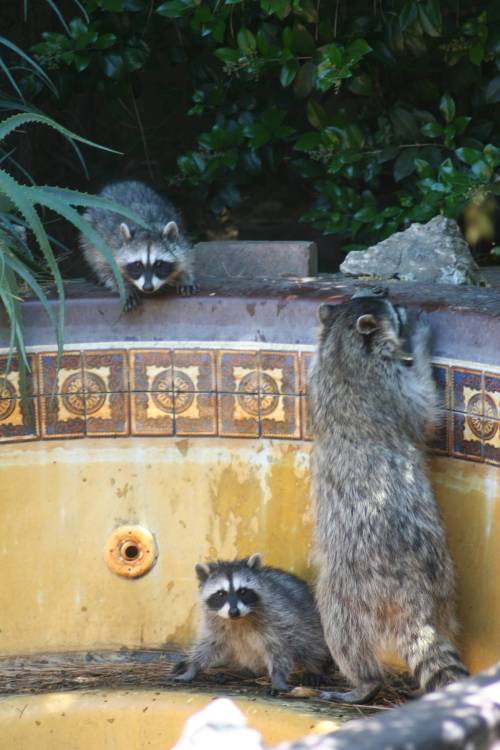 “There we go! Finally got you by the back of the head, now relax!” Sibling is thinking, “Whoa! That does not look comfortable! Remind me to stay out of the hot tub!”

Rescued at last! Raquel is either giving me the stink-eye or thanking me for pulling the dog back and not bothering her or her kids during the rescue.

FYI, total time between the first picture and the last (from the file datestamps): two minutes and twenty-two seconds.

I tried to catch some of the chatter and action with my iPhone video while I was shooting these pictures. If I get anything usable I’ll post it later.

I guess we’re going to have to come up with at least two more names. And keep Jessie on a shorter leash in the back yard for a while.

One response to “Raccoon Rescue!!”