You may have heard that there’s a total lunar eclipse tonight, or perhaps not.

Unlike the two lunar eclipses of last year (April 14th and October 8th, many, many pictures there if you’re new here) which were visible over all of North and South America, high in the sky, and had totality phases lasting for close to an hour, tonight’s eclipse isn’t any of those things.

First of all, it’s best viewed from Hawaii or someplace in the middle of the Pacific Ocean, Australia, New Zealand, or far eastern Asia. (In the map shown, night & day are switched, so dark is bad for lunar eclipse watching.) For North America, most of the country will have the moon set during some part of the eclipse. If you’re east of the Mississippi, moonset will occur before totality begins. If you’re anywhere west of the Rockies you’ll have moonset just after totality ends.

Secondly, it’s a short eclipse, just twelve minutes in totality. By comparison, the 2014 lunar eclipses had totality phases of 78 and 59 minutes, respectively. Tonight’s eclipse will be the shortest for the next several hundred years. To see why, see the NASA JPL video from which the still image above is taken. You’ll see that the moon just barely stays inside the umbra at totality.

So, if you’re Europe or Asia, sorry, no eclipse for you. If you’re in North America and you’ve got a clear sky, you can get up early to watch it. Totality begins at 04:54 PDT. If you need viewing tips (get a pair of binoculars and there is no danger to watching a lunar eclipse) or photography tips, you can find plenty here.

Will I be up and filling this space with pictures tomorrow? Maybe, I make no promises. I’ll try, no doubt, but for me it’s far easier to stay up late in the cold than it is to get out of a warm, soft bed and go out into the cold at 0300.

There was another fantastic pass of the International Space Station (ISS) over Los Angeles this evening. I went out (naturally), shot pictures (naturally), and given the early evening timing, gathered a small crowd of dog-walking neighbors wondering what I was looking at.

Looking SSW in this 10-second exposure, your first issue is all of the 737’s turning to final for Burbank’s Runway 8. But Orion looked nice above our honkin’ huge palm tree. There’s also a little “putt-putt plane” like I fly just above Orion’s belt, the line of red blinking lights.

Then I saw the ISS coming up from behind our palm tree, headed straight for the zenith. These are all 15-second exposures, which I was pleased to see was enough to show a bit of nebulosity in the Orion Nebula, as well as some orange tint to Betelgeuse and some blue in Rigel. The glare here at the upper left is from the street light just behind me.

Heading just to the west of Sirius. If you take these first four pictures, save them, and then flip back and forth between them it makes a nice, albeit small, animation. 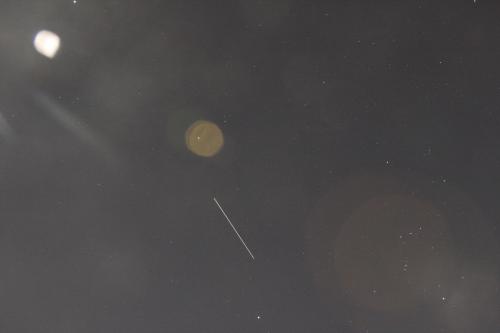 I wasn’t sure if the ISS was still in the frame (instead of looking I was talking to the neighbors and the dogs, just hitting the remote in my hand to snap the next picture as soon as I heard the shutter click off) so I changed the view more toward the zenith above. With more glare from that stupid street light, of course.

Heading toward Jupiter (at least from my perspective), which you can see just under the top edge on the left. 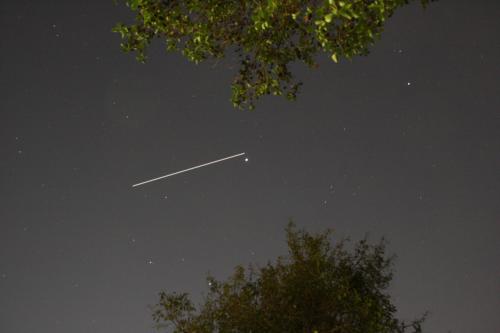 As the ISS passes overhead and is nearest to me, the length of the arc that it travels in the same amount of time gets longer. (Geometry – think it through.) I now had excused myself from the group and sprinted back across the street to the (relative) darkness of our front yard. The ISS was just passing past Jupiter and heading back down to the northeast (from right to left).

The glare now is again from that streetlight, which is now just off to the left of the frame.

Contrary to popular belief, I do not model all of my astrophotos after the work of JJ Abrams. 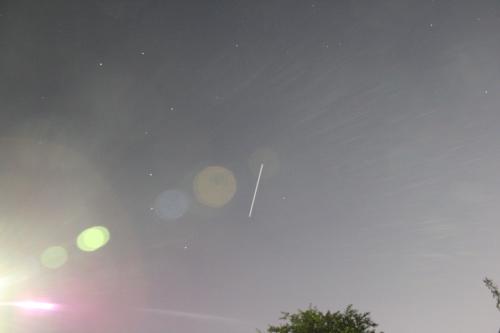 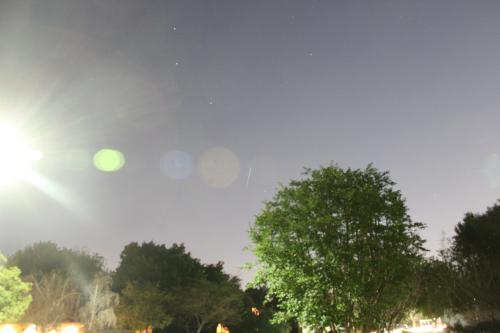 Here you can also see that we don’t actually see the ISS disappear over the horizon. It definitely goes there, but before it goes it enters the Earth’s shadow and fades into the night, still well above those trees.

Finally, the ISS gone on its way, sneaking up through the trees was the 99.9% illuminated moon, heading for its own encounter with the Earth’s shadow in about eight hours.

Maybe I’ll get up to see that, maybe I won’t.