Random Photo For May 3rd

Last night I sat down to quickly pick, write, and post something. Thinking was contraindicated, and brevity was a real goal. Ninety minutes and 895 words later, it was obvious that those plans had gone a bit off the rails. Here’s what I wanted to do before I went off into la-la land.

Given my filing system for photos and given the way Chuck Wendig has us use random numbers to pick a subject for our Flash Fiction Challenges, for those days when I haven’t got a clue what to post about and need a “seed idea” to start with, why not combine random numbers with my filing system? Pick a number between 1999 and 2015. Pick a number between 1 and 12. Pick a number between 1 and 31 (or 30 or 28). Odds are better than 50/50 that there were photos taken that day. If necessary, re-pick that third number to get a date where pictures were taken. If necessary, pick a letter between “a” and whatever the last one used is to narrow down which directory to pick from.

Find a single photo from that directory for today’s topic. 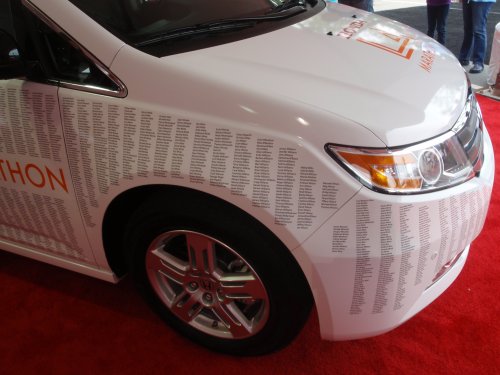 This is the day before I ran my first marathon. The LA Marathon Fair was filling a good chunk of the Dodger Stadium parking lot and we were there to pick up our bibs and swag.

Honda was at that time the big official automobile sponsor of the LA Marathon, and they had a minivan that had been detailed with the names of about 20,000 runners. Can you find my name?