Venus & Luna Are At It Again!

Those two! Talk about your monthly meetups! It’s almost like it was foretold in the stars or something.

Sorry. (David Attenborough voiceover: “He was NOT sorry.”)

The moon having gone around a full month since last month’s encounter, and Venus still being big and bright in the sunset sky, and all of them staying more or less on or near the ecliptic since there’s that whole physics and Newtonian mechanics and Kelperian orbits thing going on, the two very bright and very pretty planetary bodies are converging into a conjunction once again.

By the time that I got out there, the moon was very near the horizon, it was getting nice and dark, and this is a pretty decent representation of what it looked like to the naked eye. Except, of course, to the naked eye it was AWESOME!

If all you do is glance at the moon, you see the crescent. 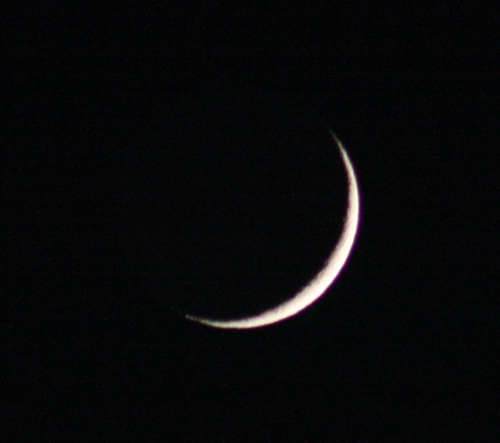 With a decent telephoto lens, as seen above, you can see some detail and craters, particularly along the terminator line.

But if you take your time and let your eyes adjust to the darkness, you can see quite a bit of detail on the “dark” surface of the moon, illuminated by sunlight reflected off of the Earth and then back to your eyes. It’s called “Earthshine.”

(Someday I’ll figure out how to get rid of that annoying internal reflection that mirrors any bright object in an otherwise dim picture – but this is not that day.)

Now that I’ve found that tripod that I was bitching about all through June, I can take longer exposures without a lot of blurring. Sort of like this one, which might be already one of my favorite picture I’ve ever taken: 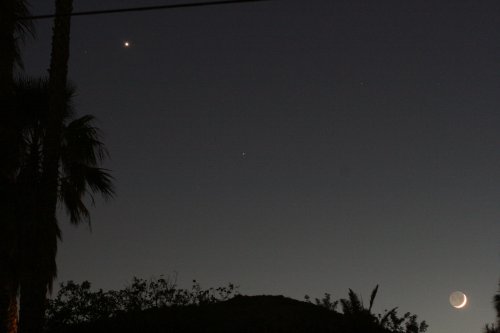 Click on it to view it in full screen. It’s not überfantastic or likely to get me invited to work at NASA or JPL next week (although if any offers come in I’m more than ready to discuss them!) but even with simple 2.5 second exposure on a tripod, a number of bright stars started showing up in the image.

So I went hunting and web surfing to ID some of them.

You’ll notice that some of these stars also have other names. For example, Gamma (γ) Leonis is also known (“commonly” or not) as Algieba. Many star names of today come from Arabic since Arabic astronomers dominated the field while Europe was in the Dark Ages for a few hundred years. Other civilizations have all had their own names for all of the bright stars (Algieba was known in Chinese as 軒轅十二 , i.e., the Twelfth Star of Xuanyuan, who was some Chinese deity dude) but most of the Arabic names have stuck.

You’ll also see a couple of stars named “HR 3980” and “HR 4035” – these are stars which didn’t rate Arabic or Chinese or Greek names, so instead they’re stuck with boring, precise, antiseptic names from our modern society. (As I’m typing this, Thomas Dolby’s “She Blinded Me With Science” is playing on the Saturday Night Safety Dance – “Science! Science! Science!” from the extended play disco version is probably an appropriate response to “HR 3980.”) When you see a stellar designation like this it will refer to a catalog of some sort, in this case the Harvard Revised Photometry Catalogue. (“Science! Science! Science!”)

Keep an eye on the sunset sky over the next couple of nights, tomorrow night in particular! Tomorrow night the moon will be very close to Venus and

IT WILL LOOK SPECTACULAR!

(Okay, yeah, I had to go do a quick search to see what the HTML code for that is as well. Let the “screwing with the way the web site looks” begin!!)