It was Hissy‘s turn to go get some well-baby care – oil change, filter, tire rotation, that sort of thing. To keep her frisky and pretty, don’t you know!

It was fascinating first of all to find that this particular dealer doesn’t have their own shuttles to get you to work any more after you drop off your vehicle for service. Instead, they have some sort of a contract with Lyft. So instead of having a van (maybe two) plus the maintenance, wear and tear, insurance, gas, a couple of employee drivers along with their benefits and payroll taxes, they pay (I’m guessing) something on the order of $5 to $10 per customer to have someone else do the heavy Lyfting.

When I got my MBA a decade back (oh, dear god, has it been that long??!!) I was always fascinated by industries being disrupted and turned upside down by things that didn’t even exist less than a decade ago. This is a great example. I wish I had the time to run some numbers and see how this works.

This afternoon when I came back to pick Hissy up there was a different issue to deal with.

As I came into the cashier’s office there were three or four service dudes discussing a maintenance issue with someone who was “obviously” very important. From the type of vehicle and the way they were kissing his ass, one can assume he had some big bucks and everyone knew it.

More of my concern was the small child, presumably his son, maybe four or five years old. Bright kid, very involved with making sure that EVERYONE in the room knew how bright he was. He might have also just snorted a five pound bag of white refined sugar.

As I came in he ran over to the unlocked and open cabinet where the keys were kept for all the cars being worked on at this particular dealership. And started grabbing keys out of it. At random. Keys that did not belong to him or his father.

Another time we can debate why they mounted that key rack so low to the ground. Or why it was unlocked. Or why it was open. What I wanted to know, besides whether or not anyone was ever going to bother to help me pay for my car and get the hell out of there, was why no one at all was trying to stop this kid.

One guy finally did (the father was totally oblivious to the chaos being caused by his spawn), by which time Kid Sugar had found what he was looking for – a set of keys that looked exactly like his Dad’s. He had found Dad’s keys! Wasn’t he special and bright and wonderful?

Except that Dad already had his keys. And pretty much all Honda keys for every car in their line with the “smart” keys look exactly the same. (I guess the kid isn’t smart enough to know that!)

The designated chaser kept trying to be ever so polite and correct and non-confrontational as the brat decided that he was going to go out and find Dad’s car now that he had Dad’s keys. They managed to keep the kid in the office instead of letting him escape into the wild with some stranger’s car keys, but no one could do what was necessary to get the keys back from the kid.

Then he ran by me (it was sort of like watching one of those televised car chases that LA loves so much and being one of the people who runs out and waves while the helicopters and police all stream by) and I noticed the little paper ID tag on the keys: 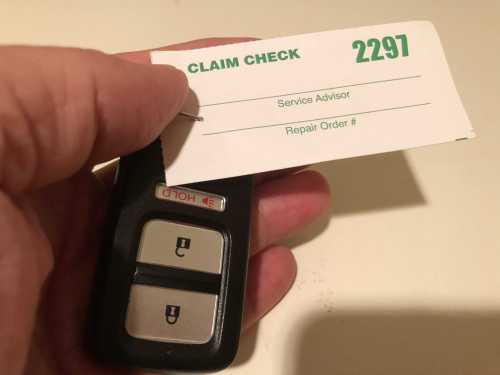 I was still just inside the door of the office, near a window, and I could see Hissy sitting out on the lot (buttoned up tight in the full sun at 103°F, an classic exercise in the greenhouse effect, thank you very much!) with the service tag hanging from the rear view mirror: 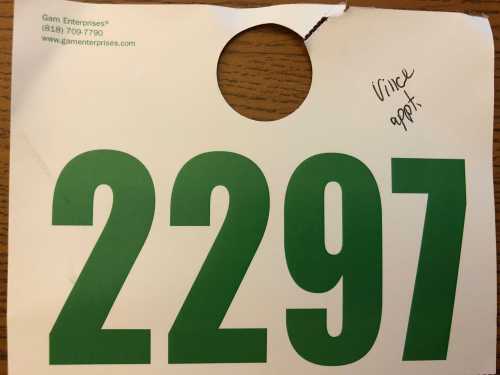 Where’s the legendary Vince when you really need him? Just to make sure, I checked the receipt I had in my shirt pocket:

Yep, the little Donald Trump in training had stolen MY keys and was running around the office with them!

I blocked the door so Demon Child couldn’t make an exit on his next lap and finally got the attention of one of the other service dudes who was busy being bored out of his mind, consumed with his dudeness. I politely pointed to the running child and asked that the keys be taken away from him. I was told not to worry about it. I pointed out that I had a vested interest and if no one else was going to physically grab the kid and take the keys away, I most certainly would when he next came by me. Then they could deal with whether or not Mr. Important could deal with the fact that I wasn’t going to kiss his ass, or nominate him for Parent of the Year.

I must have looked sincere (or threatening, although I find that very hard to believe) since they proceeded to finally corral the kid when he paused long enough to try to give my keys to his dad. His dad was still ignoring him but was finally convinced to show the kid that he already had his keys in his hand, so the ones the kid had must be someone else’s. The kid finally gave the keys back to the service dude – who of course didn’t give them to me or help me pay and get out of there, but at least it was progress.

Ten minutes later I had finally gotten finished with my thirty seconds of paying and signing and I was told to go into the lounge and someone would go find my car and bring it around. I might have done just a bit of an eye roll and taken in a deep breath and counted backwards from ten in German (you’re supposed to count silently and slowly as in meditation, but I find that doing it as “ZEHN!NEUN!ACHT!SIEBEN!SECHS!FÜNF!VIER!DREI!ZWEI!EINS!!” is more effective), but then I pointed out to the cashier that my car was right there (pointing out the window) and the keys were right there (pointing to the box) and I would love to get out of there and back to my office.

She had seen some of the chase and chaos and took pity upon me. She got the keys, looked out the window to make sure I wasn’t blocked in, and then said, “Oh, YOU’RE the one with the ‘HISSY’ plates! That’s so funny!”

I can’t wait to get their customer satisfaction survey. That’s going to be a real E-ticket!