I’ll have you know you’re getting this only because the entire day, and especially this evening, has TOTALLY gotten away from me. I’ve spent the day in a whirlwind like a juggler with one too many balls in the air and tonight I’ve been on a “mission from God” to get something reconciled for my work at the CAF hangar. Suddenly it’s 23:48…

This is the fourth time I’ve been to a Chiefs vs. Chargers game in the last few years. Twice we went down to San Diego to see them, and now both this year and last year I’ve seen them here. One thing that fascinates me (and not necessarily in the way you might assume) is the cheerleaders at these pro football games. 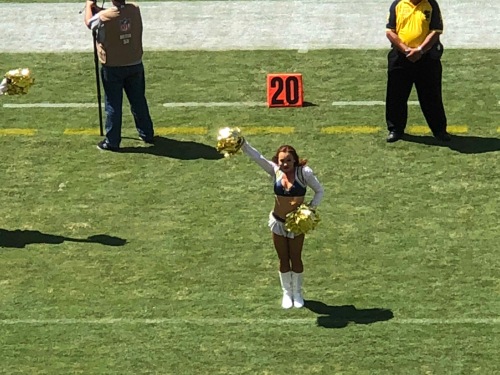 Yes, they’re not wearing much, and while I’m sure that many of these young ladies are bright and motivated and well educated and so on – that’s obviously not what’s on display here.

Isn’t this something that’s just a tad outdated, and in a sort of hideous way? 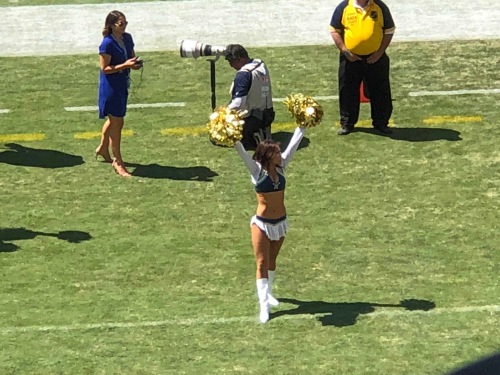 On television you see a few closeups going into and coming out of commercial breaks – when you’re at the game you see the cheerleaders trying to entertain (or at least distract) during those long, boring pauses when the television networks are selling beer, or cars, or credit card services. And they’re forced to be constantly moving, jiggling their pom poms (literally, not a euphemism), posing, strutting, smiling…

It’s all so forced and artificial and sad!

But best of all when you see it live are the handlers, coaches, or whatever the hell their titles are. See the woman here in the blue dress? Each quarter of the whole squad, each team or subgroup of cheerleaders has one of these women following them around. I’m sure they’re all radioed up so that they can coordinate with someone to make sure that they all get to where their next performance is at the next commercial, but during the interstitial periods when they’re all just lined up like robots, jiggling, posing, strutting, smiling, these women walk along behind them and whisper in their ears.

What are they saying?

“You’re not jiggling enough – pick up the pace.”

“Throw out that chest a bit more.”

“Straighten that leg, point that toe, toss your hair more…”

The more I watched the less entertained I got. I guess the “art” was just lost on me.

One response to “Charger Girls”