Heads up North American peeps! It looks like another great week for ISS passes, both in the evenings and in the mornings. Most nights this week, both. (No, you will *NOT* be seeing any pictures from me at 04:00, no matter how great the pass is. Maybe when I’m retired and can count on a nice afternoon nap…) 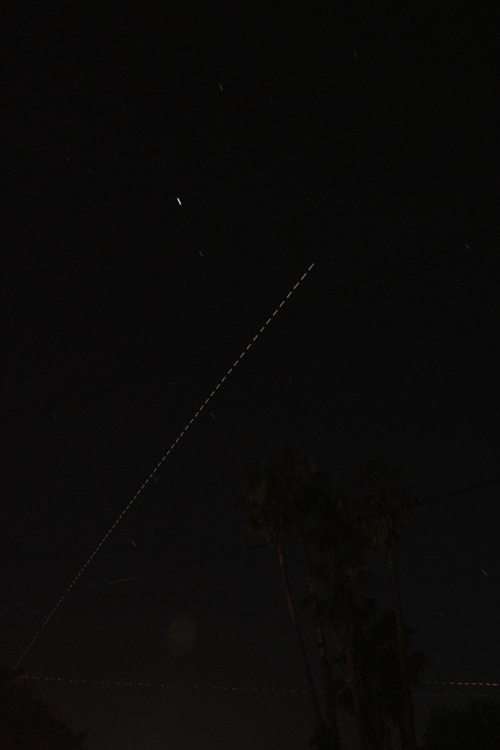 The good – I absolutely nailed the positioning of the camera to catch the ISS coming up in the southwest. If you click to get the full-sized image and look down in the lower left corner you can see the station coming out from behind that tree with the first image in the stack. (I start snapping photos about 20-30 seconds before I expect to see the ISS – digital memory is cheap.)

I also like the two aircraft tracks along the bottom. Those are almost certainly jumbo jets coming into LAX from Asia. Their normal flight route has them coming down the Pacific coast until they get off of Malibu (to the left in this view) where they make a 90° left turn toward downtown LA on their downwind leg.

The bad – I still consistently underestimate the size of the field of view of the camera. The intent was to keep snapping photos until I was SURE that the ISS had passed out of the fixed field of view so that I would have a trail from one edge of the frame to the other. Obviously I stopped too soon, probably by 25-30 seconds. (These are one-second exposures.)

Also, it seems too dark. Yes, I know that I took pictures of a dark sky at night. Still, those palm trees that you can barely see are lit up by street lights and really should be more visible. Which makes me wonder if the lens was stopped down a little bit and I didn’t know it. Something to check for next time, which I think is tomorrow. 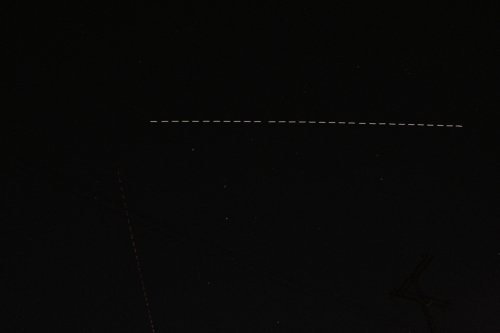 Passing almost straight overhead, again I badly misjudged how big the frame is. But just below the start of the trail (ISS was moving from left to right, SW to NE) you can see the Big Dipper hanging down. 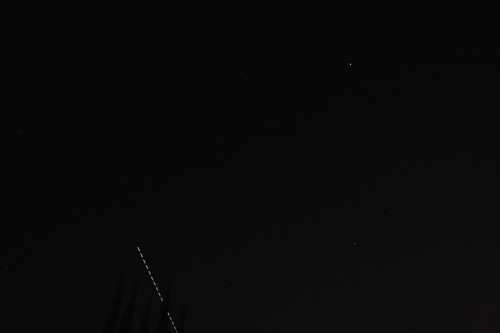 Finally disappearing down behind the cypress trees, the ISS headed off toward Denver.