As we saw about a week ago, we have a couple of bright planets in our western sky at sunset. Jupiter’s motion is taking it toward the sun from our viewpoint, so it will be heading toward the morning sky in early 2020. But Venus’s motion has it going the other way, heading toward greatest elongation on March 25, 2020. Tonight as their paths converged was their conjunction, or closest approach.

See them there in the sunset, below the wires and above the trees across the street? (Plus Saturn above the wires to their upper left – see comments below about where it’s going.)

They stand out to the eye at sunset, both very bright. Venus is in the lower left, Jupiter in the upper right.

You might have to move around a bit to get a good view between any buildings, trees, or other obstacles on your horizon. If you can get a pair of binoculars, they’ll be amazing looking and you should easily be able to see some of the Galilean moons around Jupiter. 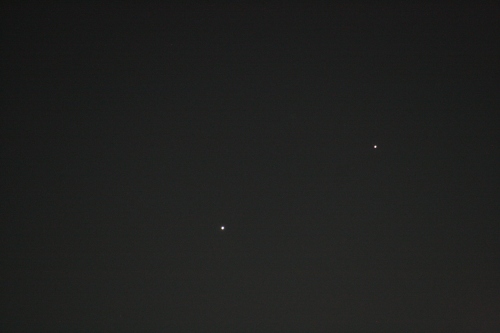 Through the telephoto lens you can lose the perspective with the ground, but you might be able to see Venus as a crescent and detail on Jupiter.

As for those aforementioned Galilean moons, if you take the picture above and click on it to see it full sized, you can see a hint of them being captured. In a line on about a 45° angle, a couple of pixels to the upper left, one on the lower right… 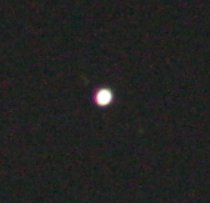 Here’s the big thing that I’m always repeating at events like these, especially since so much coverage comes from pathetic click-bait run websites – THIS WASN’T AN EVENT THAT ONLY HAPPENED SUNDAY NIGHT!

If you didn’t get to see Jupiter and Venus tonight, go look tomorrow night, or any time the rest of the month, or even into early December! The two planets will be moving further apart from one another from our perspective, but Jupiter will be clearly visible (moving closer and closer to the horizon every day after sunset) until at least December 5th or 7th or even later if you have a clear horizon and dark skies.

Even after that, Venus will be getting higher in the sky every night after sunset until March 25th, and will still be visible through the end of May! Plus, Saturn!

Look at that first picture in this post, the wide angle one – see that dot way up above the phone wires, over to the left a bit from Jupiter and Venus, sort of above the TV antenna on the neighbor’s house? That’s Saturn, trailing behind Jupiter on its way toward our morning sky. It will be passing Venus the week of December 9th, in about two weeks. So watch for a repeat of this sort of spectacle in your evening sky.

Get out there, folks!

These are not things that *BANG!!*, happen, and they’re gone. To be clear, some astronomical events are – eclipses, for example, or occultations where a star, planet, comet, or asteroid disappears behind the moon, planet, or asteroid. But that’s not what we’re talking about here.

Events related to the planets moving around in the sky drag out over WEEKS! Today might be the closest – but they were close yesterday and they’ll be close tomorrow.

One response to “Venus & Jupiter”