I mentioned a few days ago while sharing pictures of the Moon and Venus that the Pleiades (an open cluster of bright, blue stars, easily visible to the naked eye) were nearby and Venus would be getting closer to them.

It’s happening over the next few nights and tonight’s clear (-ish) here so I decided to see what I could see with the big lens.

(As always, I urge you ignore the sensational headlines online no matter how tempting it might be to distract yourselves from news of the virus and the panic and our governmental ineptitude and the growing body count. This conjunction of Venus & the Pleiades is not a once-in-a-lifetime opportunity – it happens about every eight years. And it’s not something you have to see TONIGHT or you’ll miss it – it will take place over the next week or two, so relax if it’s cloudy tonight and you missed it.)

With the telephoto lens and a tripod mounted camera, you tend to start getting “trailing” in longer exposures. This is caused by the Earth moving (and no, not in the “good” way!) and the camera not. So even at the widest field of view, after about a four second exposure you’ll get trails. But it’s easy to see the extremely bright Venus and the core of “The Seven Sisters.” 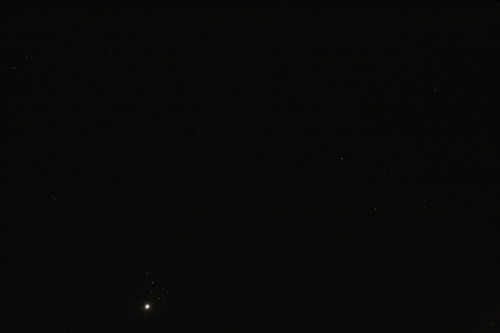 (As always, click on the images to see them full screen sized, they’ll look much better and you’ll see more detail.)

If you let the exposure go to out to twenty-five seconds you’ll see a LOT of stars – but they’re moving and trailing. And that’s some random satellite crossing the upper right quarter of the field.

Zoom in about half way and the trailing gets worse, so anything over two seconds starts to show trails

And if you go out to twenty-five seconds, Venus starts to look like a really bright comet as it smears across the image.

Finally, zoom all the way out to 300 mm and crop the image to get a nice shot of the core.

Let’s see what I can play with tomorrow night or Saturday if it’s clear! (And Los Angeles folks, there are some fantastic ISS passes coming up on the weekend!)