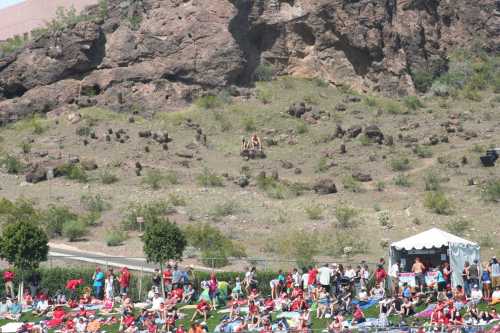 Almost eight years ago. Coincidentally the same trip when I took the picture that became the header photo for this site a month later (and still is).

Angels spring training in Arizona, this game at Tempe Diablo Stadium. In back of the field there’s a big hillside. Personally, I would rather pay the $10 (or whatever) to sit in a seat and have access to food, drinks, bathrooms, and a decent view rather be up with the rattlesnakes and scorpions (a decidedly non-zero probability in those parts), but that’s just me.

It’s also weird looking at these pictures (and I’ve been noticing it a lot in videos of all sorts of sporting events from previous years) and seeing no one even dreaming of wearing a mask or practicing social distancing.

I doubt we’ll see that opportunity for spring training in March of this year.

Well, belay that. It is Arizona, and they haven’t been real strict about COVID restrictions. There’s a reason that the San Francisco 49er’s played their last few games out of Phoenix, and the San Jose Sharks are right now playing their “home” games there. It’s possible that for spring training in seven or eight weeks they’ll have some fans in the stands.

We won’t be among them, even if it is “legal.” If the last four years have taught us anything, there’s often a world of difference between “legal” and “smart.” And in those cases, “legal” can also lead to “dead.”

Even if the rattlesnake doesn’t bite you on the leg while you’re traipsing through the desert mountainside in shorts and flip-flops.