As of 18:00 there were a few scattered high clouds and I thought it would be a great night to watch a fantastic ISS pass.

At 19:45 I went out – and it was about 90% clouded over. Thin clouds, so I could see the moon and the brighter stars in Orion, Sirius, but that was about it. I figured I wouldn’t see much at all, but what the heck, give it a try, right? 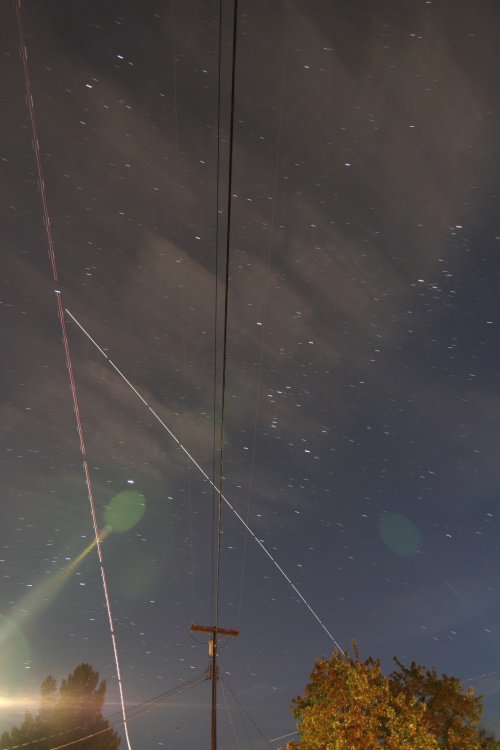 DAMN! I love this new lens. It is a razor sharp light bucket. With the naked eye through those thin clouds I could see about four, maybe five of those stars…

The green blobby thing in the lower left is that damn street light – I would pay good money to be able to switch it off for about twenty minutes.

And that white & red & green streak coming from the bottom, straight to the top? Alaska Airlines #1495, out of LAX to Spokane.

Then the ISS was overhead… 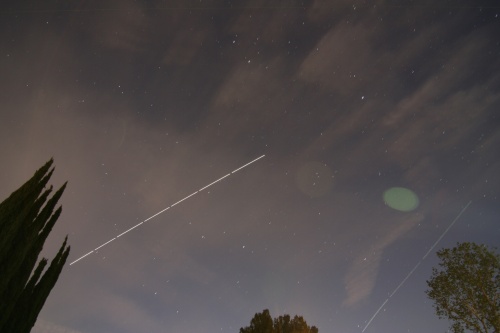 The clouds were much thicker overhead, not nearly as many stars poking through as it headed off to the north (lower left).

Stupid trees. A quick shift of the tripod, and off the ISS went, fading into the orbital night just before it went behind the roof.

If you’re in Los Angeles, there are passes every evening through the 21st, with the best one on Friday night, the 19th at 19:56. (Can’t make this shit up… Some of you will understand. The rest of you – take my word for it.)