There had been some minor confusion about the lizards that have been sunning on the driveway underneath the cars. Last year we had seen Doctor Lizardo, who had then lost his tail. Then this year, after they came out of hibernation, there was another, darker lizard there who was missing his tail but really didn’t look like Doctor Lizardo. Then there was a lizard with a re-grown tail that I thought might be Doctor Lizardo.

It was very confusing. It would be so much easier if they would wear the little name tags I made for them.

But this weekend there were two of them out there at the same time, which hasn’t ever happened that I’ve seen, so that’s brought some clarity for me.

This guy was out on the grass instead of on the concrete and brick, which was a trait of Doctor Lizardo. (I’m guessing, but I think it’s for temperature regulation – if it starts to get too hot then they’ll move onto the grass where they’ll rest on top of the blades, getting some air circulation underneath them?) 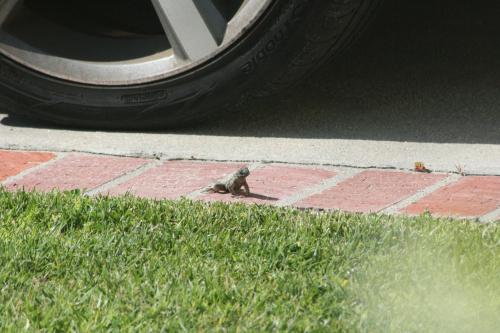 This guy is darker, almost black, and has no tail, so let’s call him Stumpy. (I say it with admiration, not a belittling attitude. If my tail got chewed off by a cat or bird, I doubt it would grow back any time soon.)

This guy has a full tail… 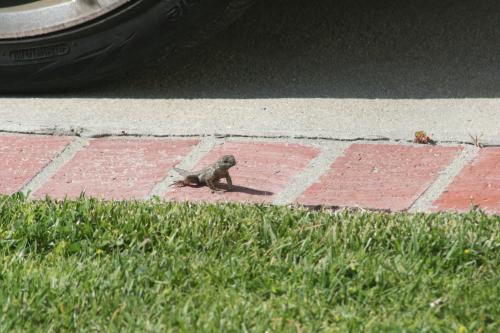 …where this guy is just starting to grow his back.

One step closer and this guy’s got an eye on me, but he’s holding fast (another trait of Doctor Lizardo)… 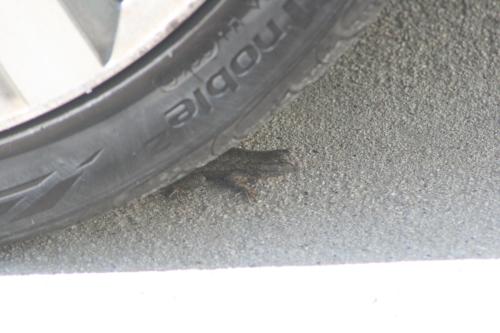 …while this guy has had enough of that shit. He didn’t run into the garage (I’ve seen him retreat under the garage door in the past) but he’s not going to stay out in the open. (I was probably still eight or nine feet away at this point, taking pictures with a 300 mm telephoto lens.)

Doctor Lizard lets me get another step closer… 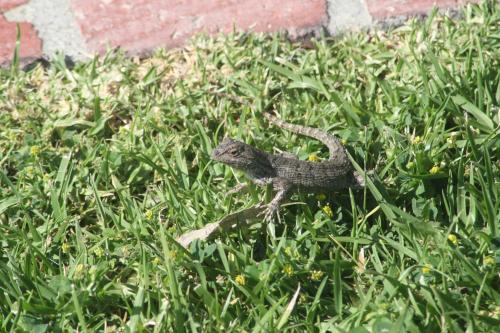 …and another. Now you can see that the tail is regrown since there’s a break in the scale pattern where the new tail grew. 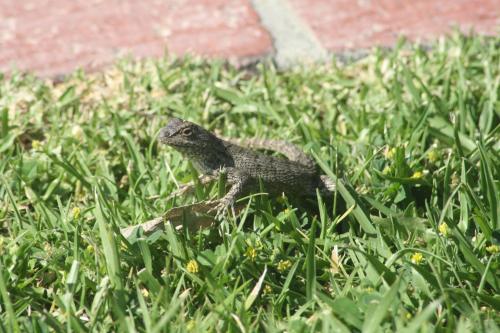 He’ll even let me crouch down to get a close-up. This is probably no more than four feet away. You can see some of the beautiful patterns to his scaling, but none of the brilliant green markings that showed up later last year. I suspect there are some color changes from time to time with the scales, depending on where we are in the mating cycle. Again – guessing. 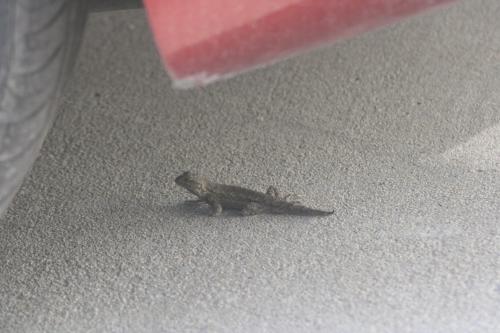 This dude has moved away from the tire to give us a great view of that tail and his scales, but he’s not going to let me get anywhere even near to closer.

Standing up from a crouch (and potentially falling over and landing on top of him I guess) was a bridge too far. We’ll retreat to under the car and pray that the shocks and suspension are enough so that he won’t get crushed when I fall onto the car. (They will be. I’m not that out of shape post-COVID!)

So, evidence of Doctor Lizardo with a regrown tail, dark brown, beautiful scale patterns, co-existing with Stumpy, much darker, in the process of re-growing his tail. A little bit of clarity.

Of course, today I went out to get the mail, Doctor Lizardo wasn’t there, Stumpy was, and there was a third lizard, a light tan color, about half of Doctor Lizardo’s size. And none of that takes into account the five or six or seven different lizards in the back yard, or the two or three that live on the big tree…

One response to “Lots O’ Lizards”