If you’ve been following this drivel for any length of time, you’ll remember that at our old house we had some raccoons that were regular neighbors. (Actually, “tenants” might be a better term than “neighbors” since they lived up on our roof and in our trees.) The most famous incident (and best pictures) came from the great Racoon Rescue episode, but we had then around pretty much constantly., sometimes in some not quite safe-for-work situations, which in turn led to encounters with up to five curious and trouble-making kits.

Then we moved about a mile away, but at the top of a hill.

Since we’ve been here I’ve seen pairs of raccoons in the early evening around sundown sometimes, but always at the bottom of the hill. Never up here.

As I had folded up the camera tripod after photographing the ISS pass, I took a couple steps toward the front door and noticed that the bushes next to the door were rustling and moving about. I thought it was a cat at first (we have feral cats we see once in a while, often with a writhing lizard in its mouth) but if a feline this would have been a bobcat, not a house cat. Nope, not a cat. Instead, out wandered a raccoon that was almost as big as a mid-sized dog. He/she was ignoring me but headed over to the flower beds (I should have been wondering why those were being dug up) but freaked a bit when I pulled out my camera and grabbed a couple of pictures with the flash. 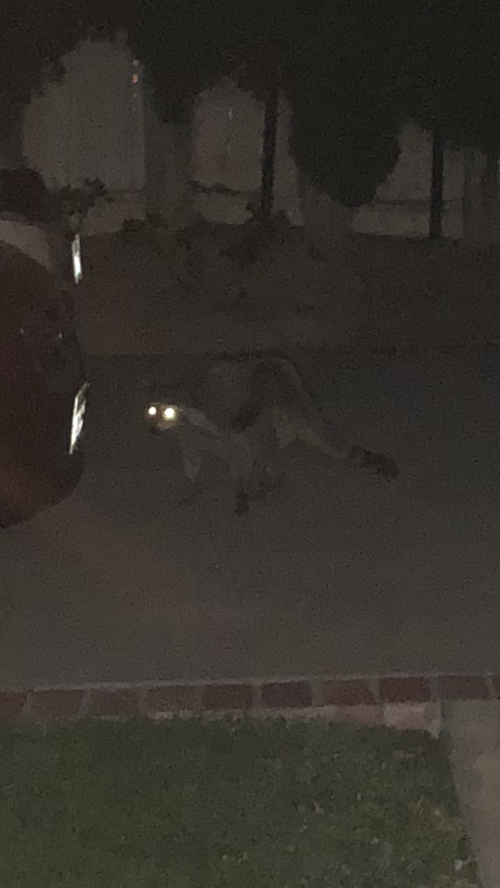 It’s a lousy shot, but under the circumstances and with the equipment at hand, good enough.

So – they will climb the hill. Duly noted.

2 responses to “Friends Of Old Friends”