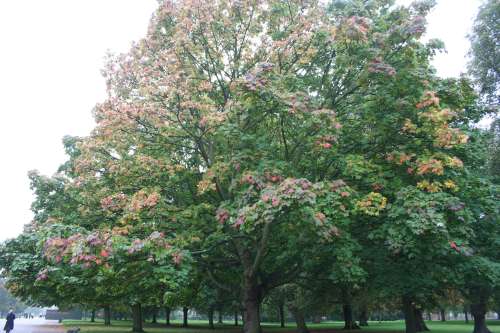 Out of curiosity, I looked up where I was on the autumn equinox ten years ago. I figured it would be some random picture around town or more birds, lizards, or dogs. Nope, I was out of the country!

In London, to be precise. I had gone to Southampton for three days of testing on a theoretical procedure for reducing drag on racing yachts. On the way home, the timing was off for getting straight from Southampton to Los Angeles via Heathrow, so I ended up with about twenty hours in London.

Poor, poor me how it worked out that way.

I didn’t get much sleep on that brief layover. There was plenty of time for that in steerage on the flight home.

This picture is from my first stop after a quick nap (I think I left Trafalgar Square about 3 AM according to the date stamp on the pictures.) It was raining, but I wasn’t going to let that slow me down. This was from Hyde Park and Kensington Gardens, followed by a quick pass past Royal Albert Hall and the Albert Memorial, the Princess Diana Fountain, then a sprint back to the hotel for my bags and a train ride to Heathrow.

Someday I would like to get to London to visit and roam and stay for at least 24 hours, maybe even 72. It could happen.