Tonight it’s clouds, unlike last night’s fog and haze and layers of ice crystals making things fuzzy. Plus, we’re back into some decent ISS evening passes. Time to fire up the light bucket! 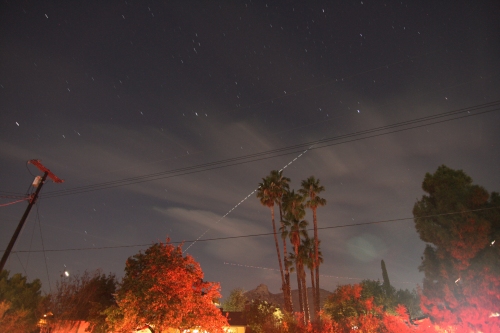 (I’m giving you the full-sized file – click on it to blow it up BIG!)

While it is fall, the foliage hasn’t gotten that red – there were a couple of cars parked there with their brake lights on.

On the left side, just to the right of the telephone pole and just above the trees, Venus is setting. Very bright.

The ISS is rising from behind that tree toward the upper right, fading out as it goes into shadow just before it passes in front of Vega, the bright star there.

Moving horizontally way off in the distance is China Airlines Flight #008, coming in to LAX from Taipei. They’ve been in the air for almost eleven hours.

Partially hidden behind that big tree on the far right is Alaska Airlines Flight #520 from Seattle, going into Burbank. They’re four minutes out on a two hour flight.

Finally, there are our scattered to moderate clouds. We’ll see how they look tomorrow night when I’m going to want to be looking at the 98% lunar eclipse.