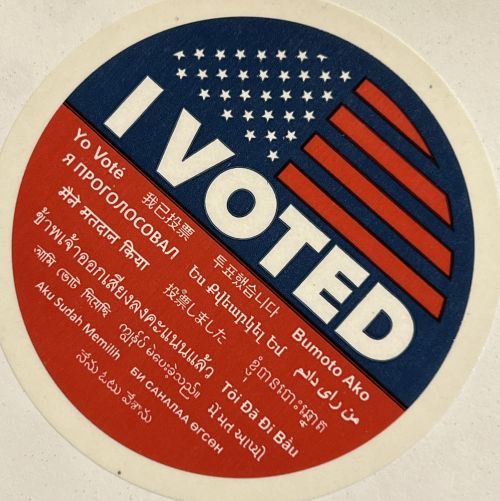 I know that there are vast stretches of this country where one of the two political parties has been working very hard for decades to make it extremely difficult for some people to vote. I understand why – it’s because they know that they can’t possibly win a free and fair election, they’re fascists who have to stay in power at all costs, and the ony way they can do that is by cheating or stacking the deck. That’s not a conspiracy theory, that’s documented fact. Just read the laws they’ve written and look at the gerrymandered maps that they’ve rigged up.

California’s the exact opposite of that and I sort of love it. When it’s time for voting, EVERY registered voter gets a ballot sent in the mail, and it’s easy to get registered. If you want to be kept in the loop on where your ballot is, sign up and they’re happy to overwhelm you with notifications. When they are going to mail out the ballots in a few days, I get a text, and email, and a phone call. Again when they actually do mail out the ballots. Again to remind me that the ballot should have arrived to remind me how many days there are to get it sent back.

Then when you put the ballot in a drop box (like I did tonight) you’ll get another round of texts, emails, and calls when they pick it up from the dropbox. And again when it’s scanned and counted.

Every time I get even the tiniest little bit of annoyance or bother about it I think about Florida and Texas and Ohio and Mississippi and Georgia and I’m just fine with what California has going for it.

After dropping off my ballot, it was time to go donate a pint. I asked them to take only the blood that was saturated with those little hemoglobin H1C molecules and leave behind the ones that are still fresh and empty and happy. They smiled and nodded a lot, but I have suspicions about their sincerity.

The needle thing is fine, but I would really like to get back the arm hair on those patches where they yanked it all off  while removing the adhesives. Yanked it off gleefully, I might add.