Jewels In The Sunset, June 22nd

Tonight we’ve gotten a few high clouds – or it might be smoke, there are a number of brush fires in SoCal, one of them only twenty miles away or so. Whatever. You can see how far the moon has moved again. Tomorrow night I might still be able to get it in the frame using the wide angle lens, but not by Wednesday. Still, Jupiter and Venus continue to close in on each other.

Pulling out the small telescope, the moon is an easy target. I really want to work on getting the focus better since I think I can get images that are sharper than this. It would help a lot if the scope could be set up on a permanent stand and the balance and gearing on the drive set up better, but that’s unlikely to happen any time soon. 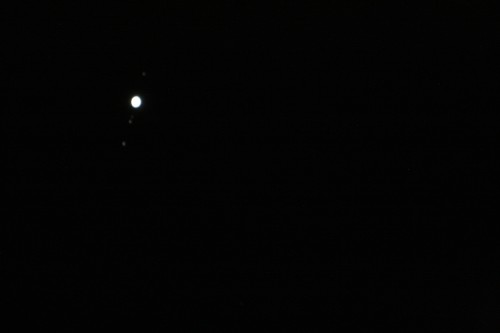 Taking a shot at Jupiter, it’s easy to see that this is a much higher magnification that the 300mm telephoto lens gives. From the top to bottom, we have Europa, (Jupiter), Callisto, Io, and Ganymede. 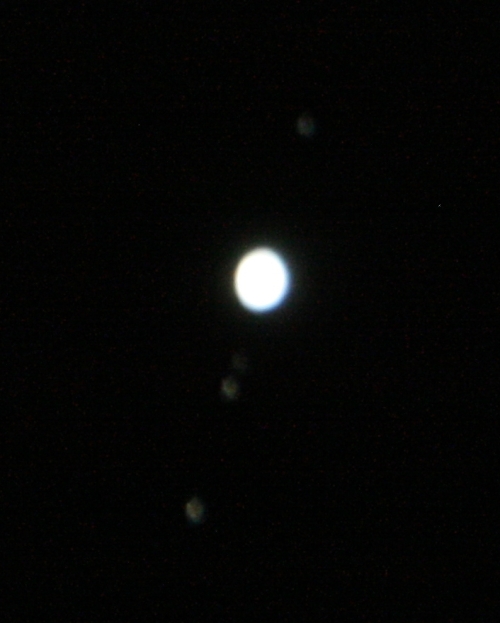 Cropping that image, it’s obvious that here also, precise focus is an issue. It’s hard to do through the camera viewfinder. Since I don’t have the guidance on the mount set up properly the scope drifts and moves a lot more than it should, so I’m using both hands to try to keep it on target while I focus. That in turn jiggles the whole system enough for it to be even harder to focus.

No detail on Jupiter, obviously, but if I could solve some of the mechanical issues, I would like to next try to take a whole bunch of very short exposures (say, 1/30 second or so) and then stack them, instead of trying to take one long exposure (this one is 1/2 second).