Jewels In The Sunset, June 25th

Celestial mechanics is your friend. Last Friday night, Saturday night, Sunday night, and Monday night, Jupiter and Venus are moving toward conjunction, with the crescent moon making a brief appearance. 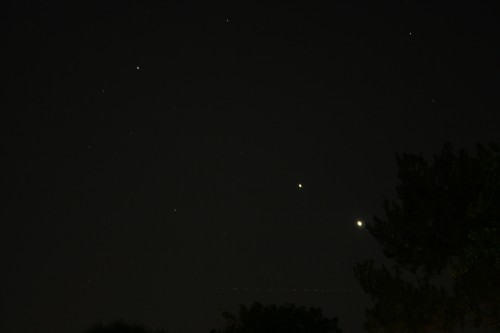 Last night, Wednesday, I caught them a little later than normal, which meant they were closer to the western horizon. It also meant the only good place to get a picture without a street light in it was out in the middle of the street. (We only had to dodge two cars at the last second!)

Tonight, higher in the sky — but still closer together. Well, at least from our point of view. Venus, the brighter one on the lower right, is 0.5533 AU (51 million miles) away from Earth, while Jupiter is 6.02 AU (559 million miles) away. 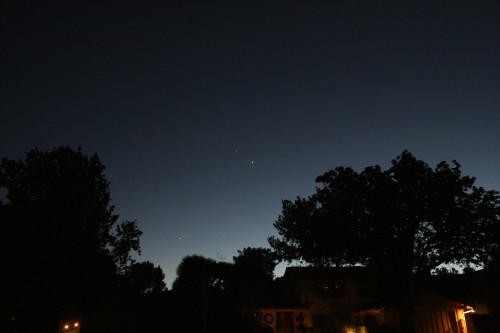 They’ll be quite the sight over the next few nights, with their closest approach to each other (in our sky) on Tuesday, June 30th.

Of course, Murphy being the impish demighod that he is…

…and with a monsoonal flow setting up, a few news outlets are predicting a good chance of scattered thunderstorms.

(I think we’ll be fine, and we may even get some spectacular sunsets to boot! Paul-lyanna Forever!)