If you have a clear Western horizon with minimal clouds over the next few days, take a look just a few minutes to a half hour or 45 minutes after sunset. You’ll see the crescent moon, a little bigger and a little higher every night. You’ll see Venus, which will be REALLY BRIGHT. And if you’re lucky (not too lucky, it’s not THAT hard), to the upper right of Venus a ways you’ll see a much dimmer object – that’s Mercury.

We won’t be seeing that in Los Angeles. This was last night:

And this was tonight: 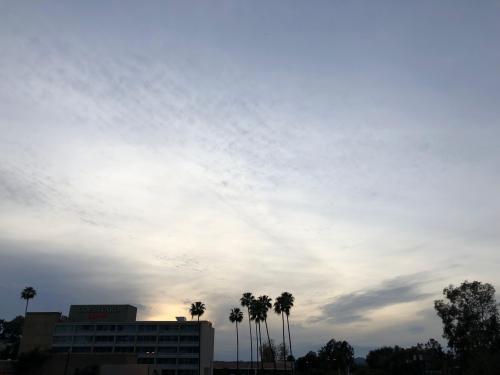 There’s a major storm moving in for the next several days, so maybe Thursday? Friday?

That’s the message from the Universe tonight. It doesn’t care what you wanted or were wishing for or were hoping for. It doesn’t care if any given time period was going to have something happening that you wanted to observe or participate in or enjoy. The Universe will cloud out your planetary conjunction or eclipse or rocket launch or baseball game or marathon or parade or plane flight or vacation and be totally oblivious and uncaring.

It us, the little animated meat sacks on this dust most in the cosmos who put meaning on it. We are the context.

Logically, or perhaps “theologically,” the Serenity Prayer has it correct in that there are three things we should ask for – serenity to accept things that can’t be changed, courage or strength to change the things that can, and wisdom to know which is which.

It’s one cloudy day when I start quoting prayers. As for this particular prayer, today I’m apparently zero for three.