The Rise Of The Freds

While packing and loading and so on, “the Freds” continue to act bizarre and to multiply. We’ve seen them in the yard for a few years now, but you’ll see one here, one there. I think the most I’ve ever seen at one time is three.

Now I see four and five and six at a time, and over the course of the day at different spots in the yard I’ll see twelve to fifteen of them. They’re not wearing name tags, but they appear to all be different just based on size, shape, and some color differences.

I’ve seen a couple of the “back yard Freds” hanging onto the stucco, but up until today I’ve never seen any of the “front yard Freds” doing it. I guess they’ve been comparing notes and taking lessons from each other.

I’m also seeing them where I haven’t seen them before. There was one of them way out by the curb, nearly getting stepped on when I was loading the van for a trip to storage.

And there’s another thing. ALWAYS in the past if I got within eight to ten feet, they were gone! Into the bushes, into the tree, under the porch, wherever. I never before got within about five feet of one – except of course for the one that ended up in our toilet. Now? I got within about six inches of this guy and he ignored me. 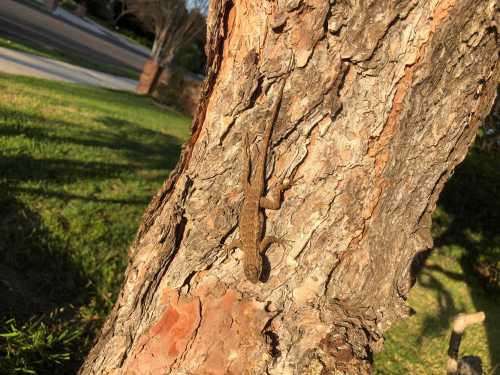 Ditto for this guy. That’s not a shining example of the iPhone’s amazing telephoto lens – that’s a wide angle shot from about three inches. This guy never moved, except to turn his head and swivel his eyeballs to keep an eye on me.

The lizards know something is up!