“Crepuscular” rays are rays of sunshine formed by holes in the clouds, otherwise known as sunbeams. They’re particular visible around sunset or in cloudy, stormy skies. While tonight’s sunset wasn’t quite five-star, it did have a few crepuscular rays on display. 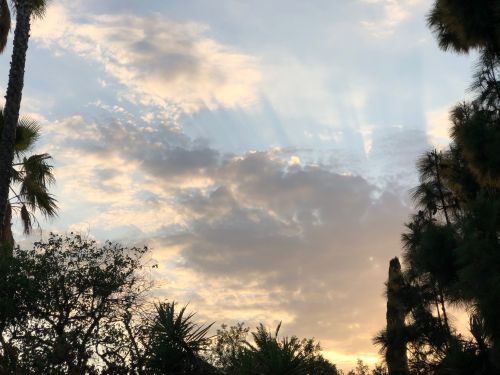 And then, just in case you forgot (or ignored) last night:

If you're on the US West Coast and it's not too cloudy (or too smoky) to see the sky, go outside RIGHT NOW and look for Venus setting in the west, a brilliant bright white. Then look to the south, up about 50°, to see Jupiter, white, not quite as bright as Venus…

Then look to the eastern horizon where you'll see Mars rising, as bright as Jupiter but blood red. Then look about halfway between Mars & Jupiter, up about 45° & you'll see Saturn, dimmer, a yellowish tint. That line from Venus to Jupiter to Saturn to Mars? That's the ecliptic!

And if you don't see it tonight or if you're not on the US West Coast at this moment or if it's cloudy – then go look at it tomorrow night about an hour after sunset, or the night after that, or any night in the next couple of weeks! The planets move, but not that quickly!!