Headphone Quest – I Think We Have A Winner!

I’ve blathered on a couple of times recently about my quest to find some decent earbuds or headphones. Thanks to a suggestion from my son who was visiting last weekend, I think we have a winner!

He had a really, REALLY good pair of Bluetooth, noise cancelling, over-the-ear, full sized headphones. So I grabbed a pair. 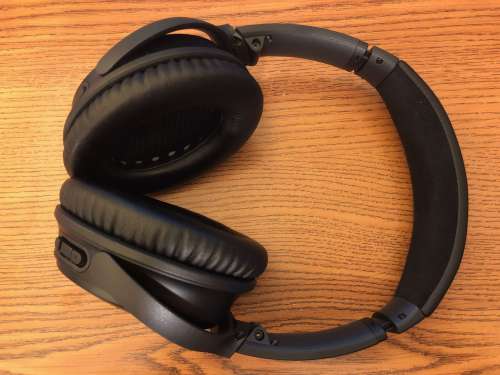 Bose QuietComfort 35 II. Not cheap. Worth. Every. Freakin’. Penny!

They’re light. I’ve been wearing them for three or four hours and except for the amazing sounds filling my head, I can barely tell they’re on. And given that they’re sitting on top of my head and completely covering my ears, they’re not constantly slipping out and changing the sound and having to be pushed back in like most of the earbuds that I’ve tried.

I can see wearing these while I run, as long as it’s not raining. I don’t think they’re built for that.

They’re supposed to last for over 20 hours on a full charge and recharge in under two hours, so that’s not going to be an issue.

They have the Google Assistant built in and a mike so I can take phone calls if I wish on them. Or I can push the button and ask for weather, news, make appointments, set reminders, and so on.

All of that’s nice. But the sound…

I’ve been at concerts where I was literally in the first dozen rows. Except for those experiences, this is the best I’ve ever heard.

I knew from trying out my son’s pair that I was going to like it. So I’ve hit the “Greatest Hits” list hard.

It’s all of the “PLAY IT LOUD!!!” stuff. Jarre’s “Oxygene 11” or “Chronologie 2” or Supertramp’s “Child of Vision” or Paisley’s “Whiskey Lullabye” or Hamilton’s “Who Lives, Who Dies, Who Tells Your Story.” With these headphones they’ll bring on tears of joy.

As I said, not cheap. (And they’re my first noise cancelling headphones, so it’s still a little odd to not hear the keyboard as I’m typing.) But if you want to listen to music while you work and you need to be wandering around, or you need some really good workout or running headphones (assuming that sweating hard doesn’t kill them – have to watch out for that), these are SPECTACULAR!