A second night up at Oh’Dark Thirty, this time about a half hour earlier than last night in order to see Comet NEOWISE F3 as it’s rising. Since there’s a limited amount of time between when it rises and when it gets too light to see it (as the Sun is rising also – stupid Sun!), I planned on using as much of that time as possible.

It was a great plan. I even got out of bed and dragged the tripods and cameras out. Probably got set up about five minutes before the comet actually cleared the houses on the far side of the canyon. A great plan.

The clouds on the horizon had other plans.

Fortunately they were hugging the horizon, so about the same time as yesterday, the comet popped out above them. Again the head of the comet was visible to the naked eye, but the tail wasn’t. Again, the tail was freakin’ spectacular in binoculars and shows up well in photos. 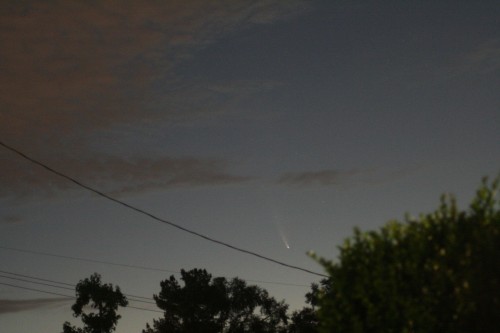 Better photographs by others (bigger telephoto lenses, guided so they can take longer exposures which aren’t blurred by the Earth’s rotation) are showing some fine structure in the tail as it was spreading out, with a separate, blue-ish colored ion tail. If you blow up these photos you can see hints of that structure, which isn’t bad for a simple tripod and 75-300 zoom lens set up in the street with no guidance. 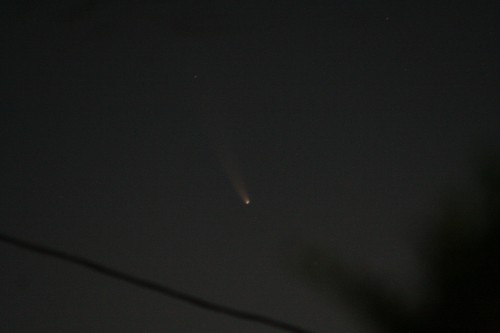 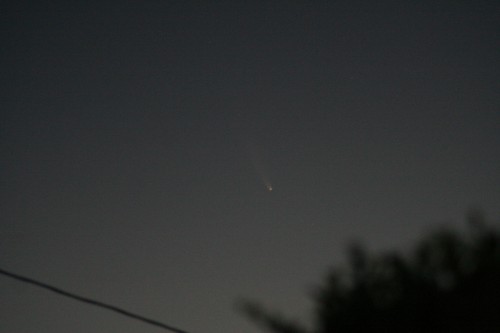 It wasn’t long before the dawn got so bright that the very low-contrast comet started to vanish. But there were other objects in the sky.

Due east were Venus (top, bright white) and Betelgeuse (below center, dimmer reddish). The interesting thing here is the ghost artifact to the right of Betelgeuse. That’s a reflection of Venus’s image inside the telephoto lens. But, while Venus itself is massively overexposed and looks like a blob, the reflection is not and shows the very thin crescent phase of Venus. 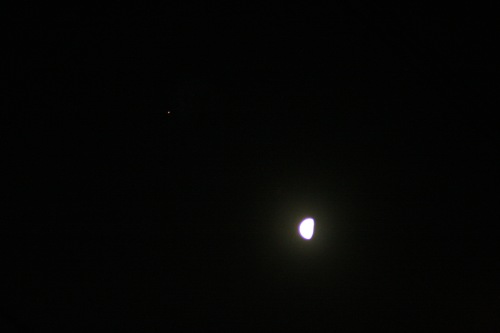 Straight overhead were Mars (dim, red, above & left of center) and a 3/4 Moon. The Moon is very, VERY overexposed in this 1/30 second exposure. How overexposed?

To get this correctly exposed picture of the 3/4 moon I had to go down to the limit of the Canon XT, 1/4000 second. The moon is really freakin’ bright.

I won’t be trying to get up at 04:00 tonight. For Los Angeles’ latitude the comet is in that transition between being in the morning sky and the evening sky where it technically IS visible in both, but so close to the sun and close to the horizon that realistically you’re not going to see it without perfect weather, a flat horizon, and some luck. (If you’re curious, play with the SkyLive time settings around sunrise and sunset for a day or two before and after today to see how it works.)

But starting tonight and then improving drastically by the day, the comet will be climbing into the sunset sky shortly after sunset. And I mean very shortly after sunset for the next couple of days (see SkyLive…) but by mid-week it should be a pretty easy object to spot, assuming it doesn’t have some massive dimming. Which can happen with comets.  Folks have pointed out that comets are like cats – they’ll do whatever they want and it’s almost always unexpected and designed to piss you off.