Over the last couple of nights the moon, a little past a quarter full, has been sailing past Jupiter and Saturn, all positioned high in the evening sky, bright and beautiful. 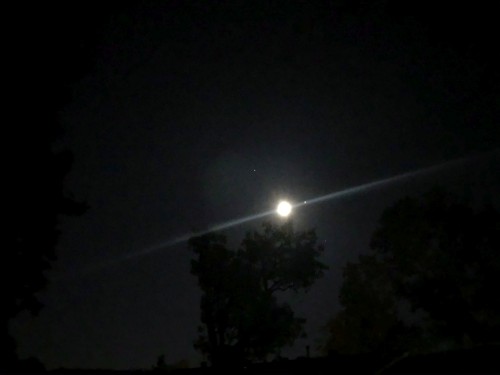 That’s Jupiter on the right of the moon, Saturn a bit dimmer to the upper left.

At some point the three of them made a nice, even triangle – I was on the wrong side of the planet to see it.

Instead, tonight the moon had passed that point and was now on the far side of Saturn, at least from this viewpoint.

One would assume that if the Moon had been transported to where it was literally on the other side of Saturn:

We also notice that the zoomed in views both nights, with all pictures taken on my iPhone, are grainy as hell. But as they say, the best camera is the one you have with you at the time.

One response to “Moon Triangle-Ish”