After last night, when some defensive backfires were set on the east side of the Mount Wilson Observatory, which looked scary but were actually controlled and to prevent worse, we were hoping that Mount Wilson was out of danger from the Bobcat Fire.

Here’s where we are now: 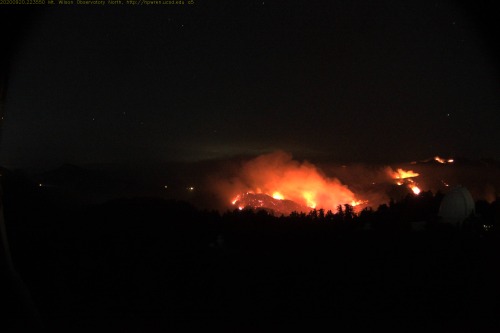 The good news is that all of this new fire growth is pushing away from the Observatory grounds. This is all about a mile to the north on the next ridge over, pushing up toward Highway 2.

(Image from Google Maps – incredibly professional graphics from yours truly.)

There have been a LOT of water and Phos-Chek drops today. At one point someone monitoring the radios tweeted that all air tankers had been diverted to Mount Wilson to make a stand there. It obviously worked.

Allllll the air tankers… The huge aerial assault on the #BobcatFire near Mt. Wilson this evening as the fire flares up yet again. All these drops were within a span of 30 minutes… Including the DC-10, 737, MD80, BAe 146 and even the US Air Force C-130. @CBSLA #Sky2 #Sky9 pic.twitter.com/yQceGsAHXB

It's important to note too — as close to Mt. Wilson as these flames look, they are actually pushing north towards Hwy 2 / Angeles Crest Highway… They aren't burning on the same slope/hillside as Mt. Wilson.

Also, while I’m obviously invested in the Mount Wilson Observatory site being protected, this fire continues to grow almost out of control for the fifth day with thousands of homes being threatened on the south side of the mountains where the San Gabriel Valley is and on the north side where the Antelope Valley lies.

This morning the #BobcatFire is at 99,428 acres and remains at 15% containment. For more information on smoke visit https://t.co/fFdJz4V1mM pic.twitter.com/PVnIGuLVbr

Up in the Antelope Valley, they were using our pair of Canadian Super Scoopers, refilling them on the fly from Lake Palmdale. Since that lake is a recreational site and at least the shore facilities aren’t closed off, it’s drawing crowds to watch.

One response to “Bobcat Still Burning”