CMA’s Neighbors To The South

The CAF Southern California Wing’s hangars are at Camarillo Airport (CMA) and we have a neighboring airport just a few miles to our south, the Naval Air Station Point Mugu. It’s a great place for an airshow every couple of years (if we can ever get this COVID-19 bullshit behind us) and they fly some out of there, but there’s not a ton of air traffic in and out of there. It’s not like living next to MCAS Miramar or NAS Oceana where you can see a pretty steady stream of fighters, cargo aircraft, and reconnaissance missions. 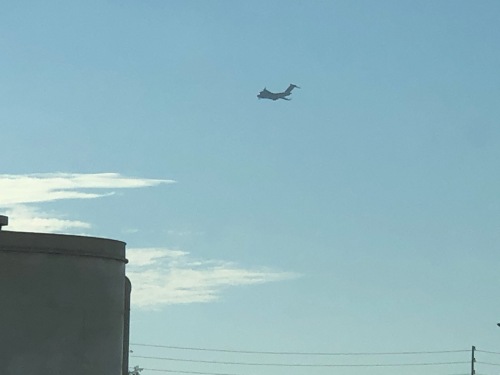 But as I was leaving yesterday, this big guy was lumbering in from the north, hanging there exactly the same way that bricks don’t.

He was a ways off, turning to final approach, but I’m pretty sure that’s a C-5 Galaxy. Usually the cargo planes going into Point Mugu are the smaller C-130 Hercules (back when I was flying I had a couple of them on long finals that I gave a wide berth, because the wake turbulence can be a bitch and a half if you’re in a tiny Cessna!) but today we had something large being moved.