Not An Aircraft You See Every Day

Out at the CAF hangar today we were taking delivery of an unusual aircraft. 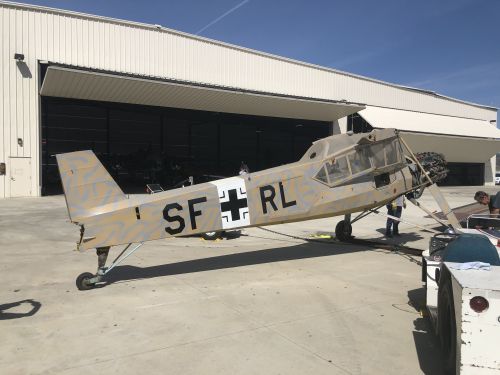 This one was partially disassembled for transport to us from San Bernardino County, with the fuselage on one truck, the wings on another, and the propeller, horizontal stabilizer and other parts coming in separately. 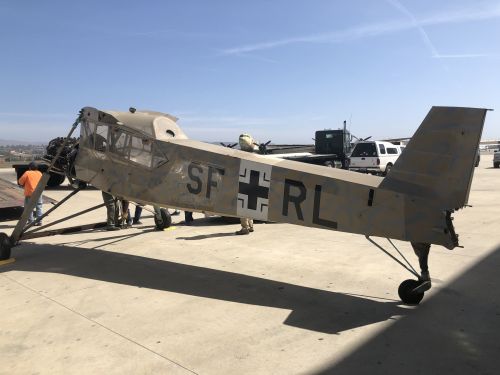 It’s a fixer-upper (as many CAF aircraft are) but that’s what we do, and this aircraft will probably be flying again in 2-5 years, depending on our volunteer manpower, workload, and of course, funding.

To be honest , this aircraft is in MUCH better shape than some we’ve gotten. Some are 15-20 year projects, if we’re lucky. Here we at least have an engine and all of the major parts.

A peak inside the floor of the cockpit, showing the foot controls for rudder and brakes. 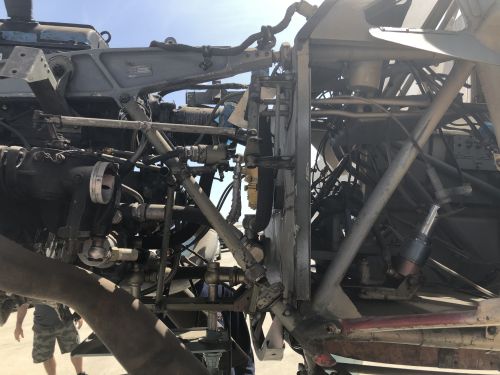 And the big picture at the firewall, engine mounted to the left, controls and cockpit on the right.

Not something we see every day, at least, not with the engines running!

The American Aeronautical Foundation has a couple of planes out at Camarillo and rents space in our hangar and on our ramp. (Their B-25, “Executive Sweet,” is excellent!) This is their C-47 Dakota, which hasn’t flown in a while. 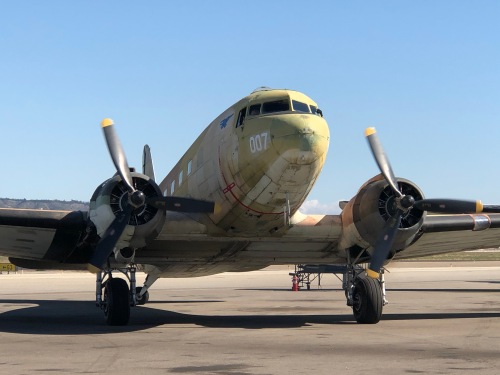 But they’ve been putting a ton of work into it recently and today was the first day that I’ve seen where the engines have been running and it was moving around the airport under her own power.

Here you see it alongside our C-46 Commando, “China Doll.” The C-47 didn’t fly today, at least not that I saw, just taxied around the airport and ran up the engines. But they’ve got to be getting close!

CMA’s Neighbors To The South

The CAF Southern California Wing’s hangars are at Camarillo Airport (CMA) and we have a neighboring airport just a few miles to our south, the Naval Air Station Point Mugu. It’s a great place for an airshow every couple of years (if we can ever get this COVID-19 bullshit behind us) and they fly some out of there, but there’s not a ton of air traffic in and out of there. It’s not like living next to MCAS Miramar or NAS Oceana where you can see a pretty steady stream of fighters, cargo aircraft, and reconnaissance missions.

But as I was leaving yesterday, this big guy was lumbering in from the north, hanging there exactly the same way that bricks don’t. 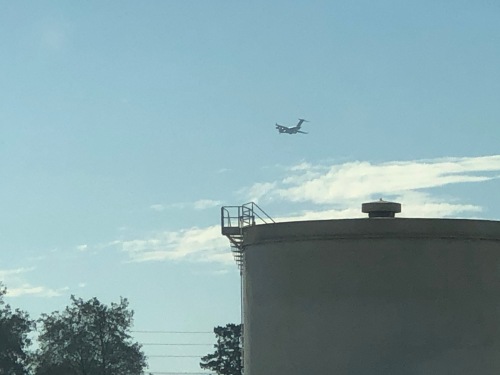 He was a ways off, turning to final approach, but I’m pretty sure that’s a C-5 Galaxy. Usually the cargo planes going into Point Mugu are the smaller C-130 Hercules (back when I was flying I had a couple of them on long finals that I gave a wide berth, because the wake turbulence can be a bitch and a half if you’re in a tiny Cessna!) but today we had something large being moved.

If you’ve never taken a flight in an open cockpit plane, I highly recommend you try it!

This is our PT-19 trainer out at the CAF Southern California Wing in Camarillo.

Boarding is a little bit different than on Southwest or United – just climb up onto the wing, stay on the black strip, flip a leg over, and settle in. 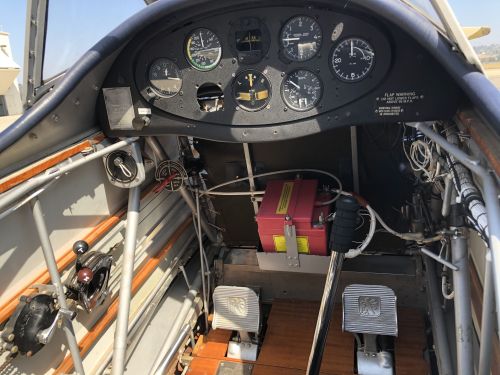 In the back seat you’ll have that stick moving around and the rudder pedals moving back and forth as the pilot flies the plane. Try not to hit those unless you’re flying the plane. Those other knobs and levers are for fuel and throttle and flaps – don’t touch any of them, either. Just enjoy the view!

If you want to fly and you’re in SoCal, get in touch with us once the COVID thing is over. (We’re all grounded right now.) We can make that happen!

Maybe “new” isn’t quite the right word given that this aircraft type was designed in 1947 and this particular aircraft is 35 years old. 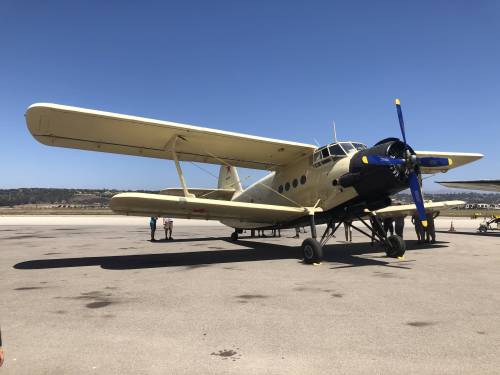 It’s an Antonov AN-2, a tail-dragging, single-engine, biplane. We acquired it from another Wing, along with the Messerschmit 108 that arrived a few weeks ago.

I’ll bet you haven’t seen these in your neighborhood recently! Trust me, you would notice, it’s a big aircraft!

The AN-2 is still in service all over the world as a passenger and cargo plane, primarily in remote and undeveloped areas. It’s able to land and take off from undeveloped surfaces such as grass trips, open fields, sand bars, deserts, and so on. 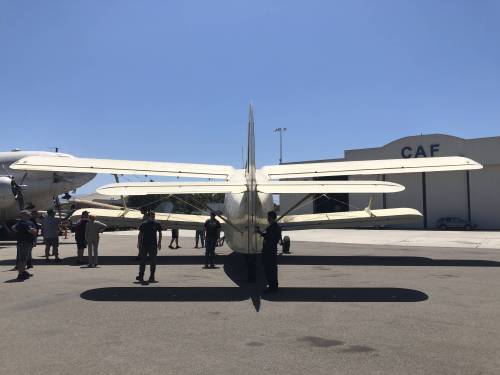 The most amazing thing that I’ve seen is that it doesn’t have a stall speed. If the engine fails you need to keep it under control, but as you slow it will simply descend to the ground at about the same speed you would land under a parachute.

It’s big, lumbering, and slow, with at top speed of 160 mph and a cruise speed of 120 mph. (A Cessna 172 is faster.) But it will fly perfectly well down to about 30 mph and in fact can be flown backwards over the ground if it’s flown into a headwind faster than that.

As a passenger aircraft it typically carries 12 passengers. (AK-47’s are optional.) We won’t be taking passengers – as a foreign-manufactured aircraft the Big Panda II isn’t eligible for the CAF’s ride program.

The cockpit is a thing to behold. The GPS unit on top of the dashboard might not be 1947 original equipment for this type. 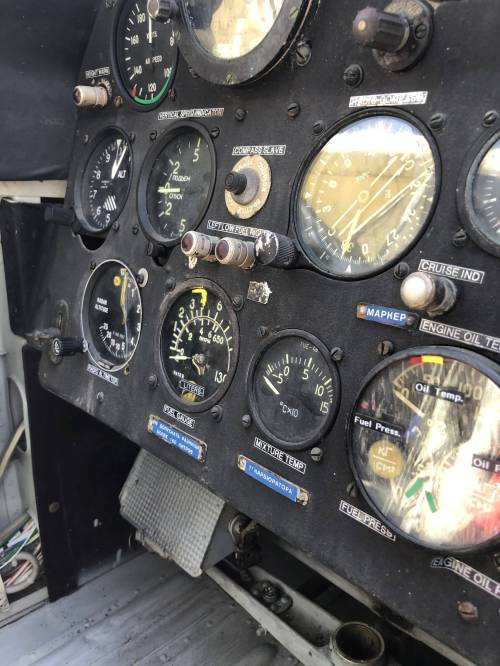 Designed in Russia, many of the instruments still have their Russian markings, and most are in metric units. 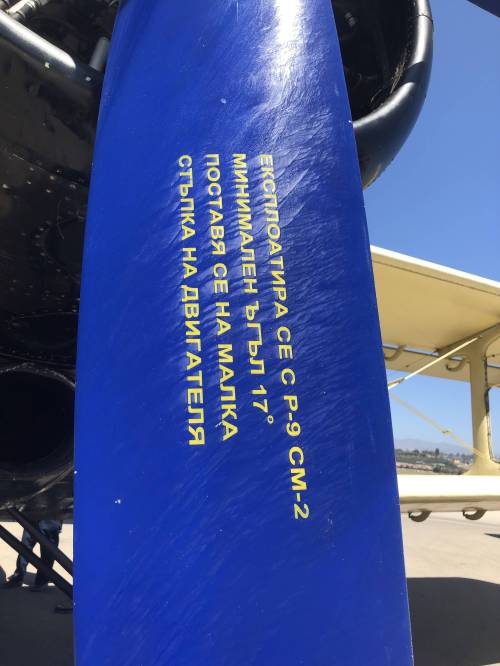 And the markings and specifications on the four big blades are in Russian. My Russian is just a bit rusty (i.e. I know about five words that I learned from James Bond movies and Tom Clancy books) so I can’t tell you what it says, but it’s an attention getter.

Ever wanted to see the panel on a Messerschmitt 108? Today’s your lucky day! 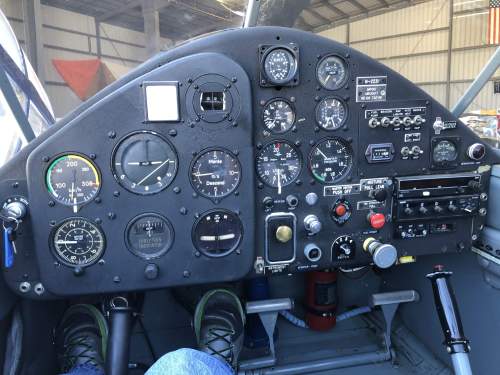 But the really weird thing(s) that I’ve never, EVER seen in an aircraft panel? Want to take a gander and see if you can spot them? 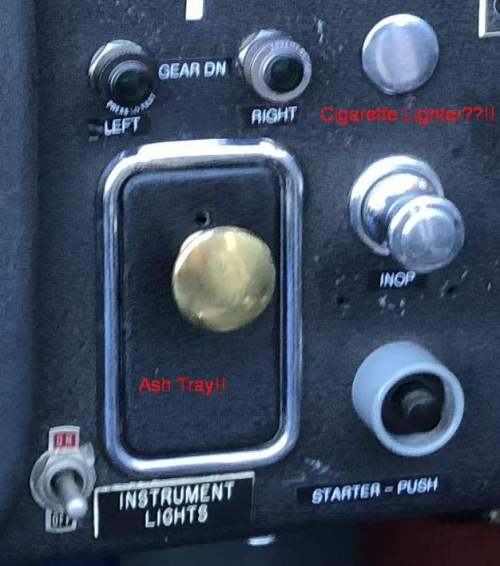 If I had a list of things that were the least likely things that I expected to see today, this probably would have been pretty high up on the list.

I was out at the CAF hangar for a few minutes today to pick up the mail and make the bank deposit. We’re still shut down there and while there were a few dozen folks there working on planes and such, for me it’s masked up, in and out.

It’s not rocket science to figure that my political views are not widely shared in that particular segment of the population. So I was surprised when one person asked (jokingly) how I was going to make it to the Trump rally in Tulsa tonight? Was someone saving me a seat?

He pointed at the sweatshirt I was wearing. 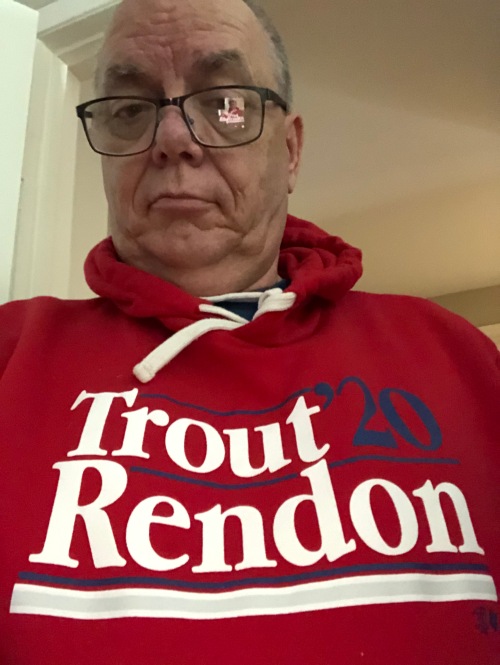 Talk about seeing what you expect to see…

Yes, it’s bright red with white and blue letters, has sort of kind of “that” layout and font (it’s supposed to, it’s a spoof), and the most prominent word is five letters starting with “Tr” and then there’s a “u” in there somewhere.

That first word isn’t “Trump,” it’s “Trout,” as in American League MVP Mike Trout, center fielder for my beloved Angels. And the second word, “Rendon,” is for Anthony Rendon, free agent All-Star 3rd baseman who signed with my beloved Angels over the off-season. (Which sort of assumes the existence of an “on-season,” but don’t get me started. No, really. Don’t.)

This was going to be our year to take the World Series again before the shit hit the fan and the world went into COVID-19 quarantine. My son got me this as a Christmas present when the Angels’ future for ’20 was bright and shiny.

It’s been a while. Let’s look at a lizard. 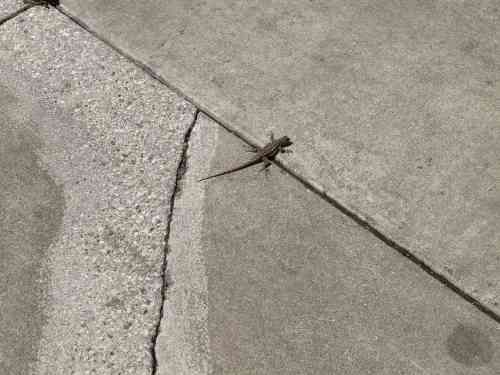 I haven’t seen a lot of lizards at the house in several months. It’s been cool and cloudy more often than not. However, this big boy was spotted right outside the hangar doors at the CAF site on Saturday when I was there to pick up the mail.

I know that these guys are out in the area (hell, they’re EVERYWHERE out here) but they usually are pretty shy and skittish if there are any folks anywhere nearby so I’ve never actually seen them anywhere near the hangar. It’s only now with the place about 99.9% shut down that I stumbled on him.

On the other hand, he wasn’t shy about standing his ground. I only saw his head moving a bit to track me as I walked around. I kept waiting for him to bolt – he never did! 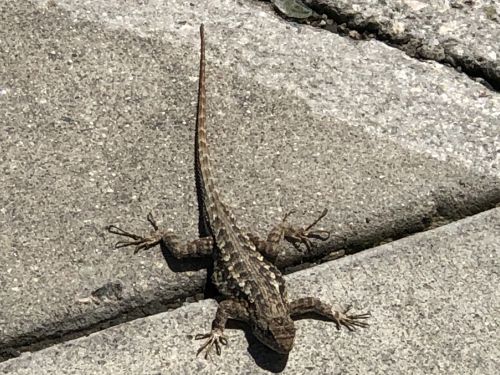 Since I was just doing an in-and-out visit and he had found a perfectly sunny spot to warm up, I bid him a fair adieu.

It sounds absurd to many to hear that the six straight days of rain in SoCal left as much as a foot of snow. It would be absurd if there were 12″ of snow in downtown LA or at LAX or at our house at ANY time of year. (I’ve been here over 45 years and I remember once getting what could generously be called a “dusting.”) Yet from the hangar today in Camarillo, there it was!

But up in the mountains on the northern end of Ventura County (shown) they get up to 5,000′ or more. And in Los Angeles County, those gorgeous peaks you see in the background during the Rose Parade every January 1st, several peaks climb to over 9,000′ and Mount Baldy is over 10,000′. So, yes, they get snow. There are ski resorts up there. (Yes, in LA in the winter you can often go surfing in the morning and snowboarding in the afternoon. If you surf. And snowboard. I don’t do either, BTW.) 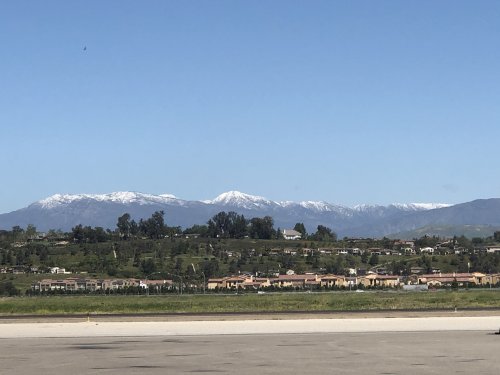 That all having been said, it is a bit odd to get snow this late in the year. But then again, it’s also odd to get rain for six days in a row (over 4″ around our house).

So we don’t have it nearly as bad as the folks in Maine who got a foot of heavy snow late this week and were losing power all over the place, or all of those who are going to get up to a foot of it across huge swaths of the Midwest tonight and tomorrow.

Ours just made for some picture postcard views.

Big Planes In The Rain

Clouds, drizzle, cold, and occasional downpours courtesy of a dark and suck-filled timeline.