The planets move about the sky in their orbits, like clockwork, and sometimes they come near each other from our viewpoint. This is called a conjunction.

We’ve had conjunctions before, they’re not that uncommon at all. Jupiter and Venus get close pretty regularly. The Moon literally “runs over” planets from time to time (this is referred to as an occultation) and gets close to something (often Venus) pretty much every month.

You’ve probably heard news reports, possibly some rabid ones, about the “Christmas star” coming up in eleven days. The simple fact is that it’s just another conjunction, where Jupiter and Saturn will be in conjunction, close together from our viewpoint in the solar system. What makes this one special is that both planets are reasonably bright, and for this particular conjunction they’re going to be REALLY close together.

It should look gorgeous.

You don’t need a telescope. You don’t even need binoculars, although even a simple pair will show you some of the larger and brighter moons of both Saturn and Jupiter. You just need your naked eye and a clear sunset sky. Go out right after sunset, look to the southwest.

Jupiter will be very bright, white, and Saturn will be just a bit to the upper left of it, slightly dimmer, with a slight yellowish tinge if you’ve got a clear, dark sky.

If you’ve got binoculars or a big telephoto lens, zoom in a bit. Depending on timing, you may see four small dots in a line near Jupiter, and maybe one small dot near Saturn. Those would be moons. 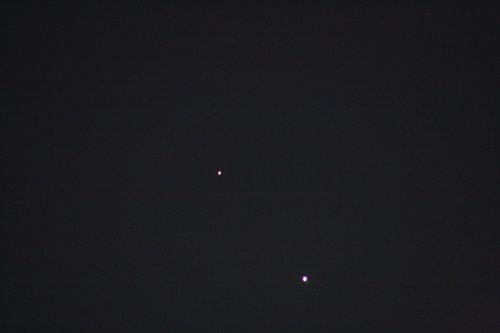 Over the next eleven days the two planets will appear to get closer and closer. They’ll be just a small fraction of this distance apart.

Tomorrow night I’ll try to get a better tripod setup so there’s not so much vibration, and I’ll try to get better pictures. I hope you’ll be out trying to see it as well.

One response to “The Great Conjunction – December 10th”