I hope that everyone had a safe, fun, perhaps even wonderful day. I know that many of us wanted more than just about anything to be with family and friends today, but chose instead to stay home and be safe. Thank you for that, not just for everyone else who might have been kept safe by that decision, but because YOU might have been kept safe by that decision. It sucks, but next year will be better. We’re already making our plans and if you’re safe now, you’ll be around and healthy to make your plans for Christmas 2021.

It was pretty much clear and a million here all day, right up until about sunset. Even then, about 2/3 of the sky was clear, but to the west…

Very pretty, but if you’re familiar with the pictures from the last several weeks, right in between those two sets of wires and right above that biggest tree – and right behind those clouds! – is where Jupiter and Saturn are.

The clouds were moving, coming from the west in bands. Sometimes Jupiter, being very bright, would pop through. 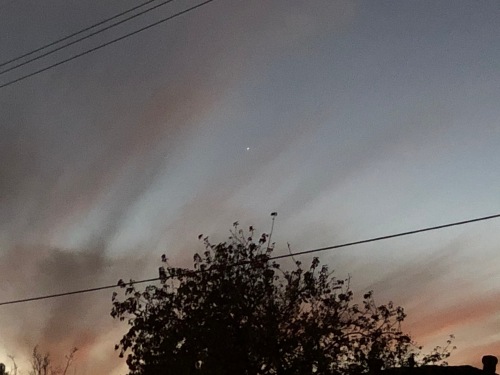 But even if you could see Jupiter, Saturn was tough. It doesn’t take much of a cloud layer to wipe it out. So I tried to be patient, wait out their imminent setting, and shoot through the thinner clouds between the heavier cloud bands. 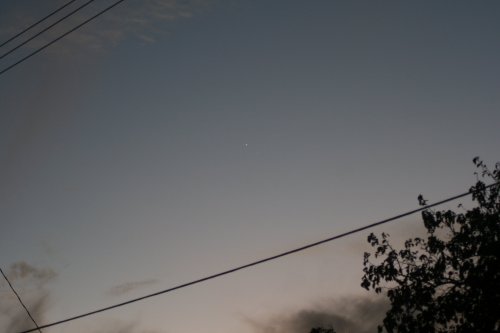 Patience paid off, sort of. Not excellent, but given the conditions, acceptable. You can see that Saturn is now below Jupiter, closer to the Sun, after starting a couple weeks ago up above it.

The haze and high clouds made it tough to see Jupiter’s moons. That halo around Jupiter is from the clouds, and it wipes out what should be a clear view of all four Galilean moons. (Click to see full-sized image.)

Were they there to be seen? Yes, most certainly. I had pulled the telescope out as well and I could clearly see all four moons. The human eye is GREAT in high dynamic range situations and finding detail.

Here as well, the moons are wiped out by the haze in trying to take a picture with my iPhone through the telescope lens. But look how far apart they are compared to four days ago at conjunction! Tonight was probably the last night that they’ll be visible together through my medium magnification eyepiece. (This picture and the next one are flipped top to bottom so they match the views seen above – Jupiter on top, Saturn on the bottom.) 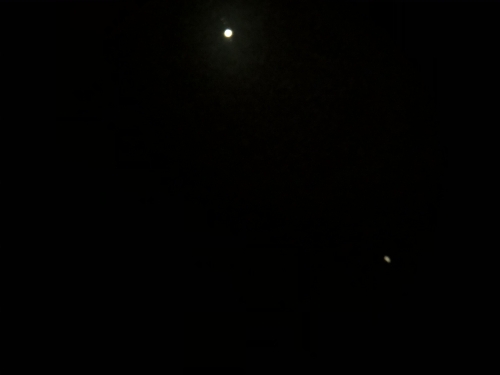 Shoot enough pictures fast enough and you might get lucky – this was the best for tonight. Saturn’s definitely elongated, almost sorta-ish able to see the rings (which were clearly visible through the eyepiece to the naked eye) and through the haze, you can also almost sorta-ish see three of Jupiter’s moons.

Remember, another week to two weeks or more to see these gems in the sunset sky. They’re moving apart, but they’re still beautiful.

If you don’t have clouds.