We didn’t get much actually AT our house, but you can see one of the nastier cells moving by to our west and south. 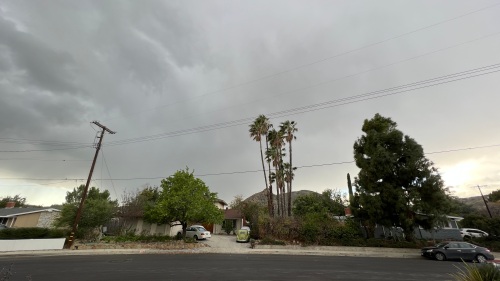 This cell dropped a pretty good load of hail in Calabasas where one of my daughters teaches high school, then went on to cause some havoc down by Santa Monica Airport and then LAX. I happened to be listening to ATC for Burbank at the time and they were getting folks diverting there who had intended to go to Santa Monica and then thought better of it. Later on I saw that some of the big commercial jets, instead of coming straight in from the east onto the runways for LAX were heading 20-30 miles north up over Covina before looping back down to catch the glideslope just because of a long tail of nasty showers and hail stretching from Long Beach to Pasadena.

It was in the mid 90’s here on Sunday for the Super Bowl – today it looked like it has snowed at the Rose Bowl in Pasadena there was so much hail.

We got a smattering of rain and it was thirty to thirty-five degrees colder than it was two days ago. Almost like East Coast weather…