Poor planning. For whatever reason, when I had looked prior to the eclipse at where the Moon was rising and would be, I had it wrong. I thought it would be much easier to see from the back yard. Instead, I was fighting to find holes through the trees all night. 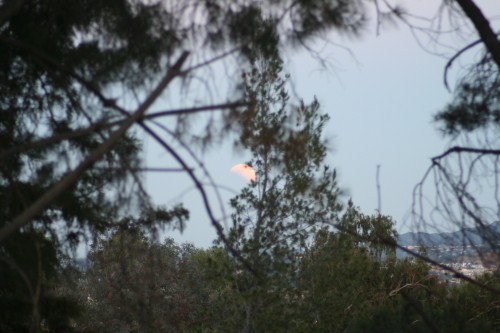 I knew that the Moon would already be in partial eclipse when it rose in Los Angeles. Celestial mechanics are out of my control, but if I had known then what I know now I probably would have packed up all of my gear and gone off to a local park where I had a good, clean, clear, flat, unobstructed view of the east. 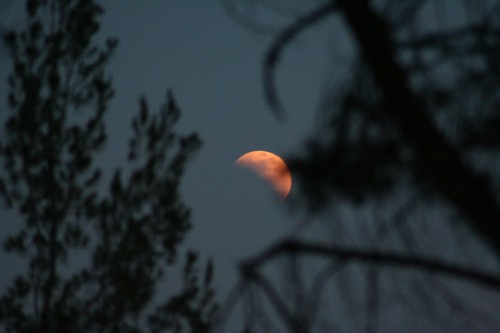 As it was rising the Moon was orange, but that wasn’t because of the eclipse. That was because the light hitting it was going through a LOT of atmosphere as the sun set on the western horizon. Same thing that makes the sun look orange at sunset. But this Moon was just minutes away from full – it should have been 100% illuminated and round as round can be. Instead, half of it was in the Earth’s shadow, with more slipping into shadow by the minute. 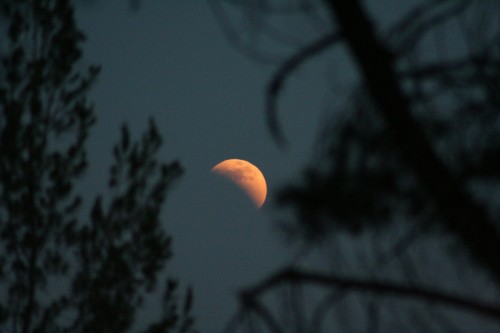 The other effect you see from the Moon being so far down near the horizon and being seen through so much soupy, turbulent air was that it’s lumpy and uneven, distorted by the bubbles of hot air rising off the pavement and buildings of Los Angeles off to the east. 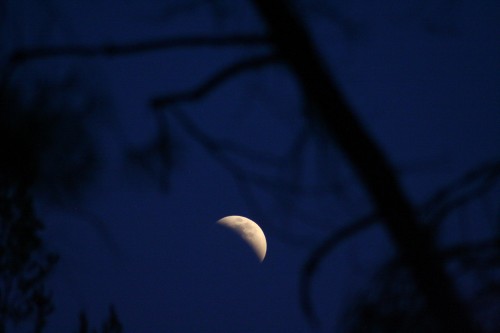 A few minutes later, when the Moon had risen a bit, you could more clearly see that it was still the same old white Moon that we’re used to, but with more and more of its surface covered by the Earth’s shadow.

About ten minutes before totality began, if I exposed for the illuminated part, the shadowed part seems to vanish…

…but if I expose for the shadowed part, the coppery orangish red color of the full eclipse starts to show through.

Pulling back from the closeup view, you can see the trees framing my view (as I was moving all over the yard to find holes to peek through) as well as the city below.

Finally, just a minute or so before totality, a long exposure to bring out the red color of the Moon as well as the city below. (THIS is a wonderful picture which I love dearly.)

Mere seconds before totality, the last little sliver of the Moon’s limb clinging to sunlight.