NASA Social For Hubble25 (Part One)

I really did not expect to get an invite to this event, but I am so, So, SO glad that I did. Having attended three previous NASA Socials at NASA Armstrong and JPL in Southern California, I knew that there would be some fantastic material displayed and some amazing people to meet. Since this event was in Washington, DC, I expected the “superstar” factor to be ramped up a notch, and I was not disappointed.

This was the first event where I was in attendance at a NASA press conference. At a couple of the earlier events on the West Coast we had “participated” in the national news conferences, i.e., we had watched and the group had one or two questions transmitted to be answered at the main event.

The 25th anniversary of the launch of the Hubble Space Telescope (HST) is a milestone event, and it was clear that NASA would make a big deal about it. That was confirmed and reinforced when I got to Washington.

The event was to be held at the Newseum in downtown Washington, just blocks from the Capitol and NASA Headquarters. I had been down to the Mall area the previous day, in part to do the obligatory sightseeing, in part to make sure that I knew how to get there from my hotel using the DC Metro system.

Hey, pop quiz! Guess what I spent the half-hour doing? (If you said, “taking a LOT of pictures,” you’re a winner!) 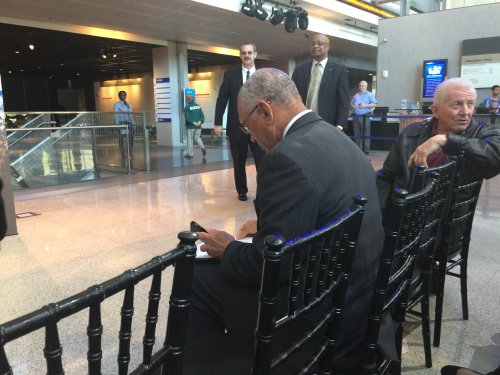 Immediately upon getting inside it was clear that I was not going to be disappointed. Told to grab a seat anywhere except for the first row center seats, I got second row center. Yes, that would be just two seats away from USMC Major General (retired), four-time Space Shuttle astronaut, and current NASA Administrator Charlie Bolden.

I did my best to use my “inside squeee.” No one was looking at me funny (well, no funnier than normal) so I guess I did okay.

Other people looked familiar. Not all were wearing the “normal” NASA astronaut gear (that gorgeous bright blue jacket or flight suit) but my Google-fu was strong. It wasn’t hard to figure that they might be astronauts from the six Space Shuttle flights that launched and serviced HST. 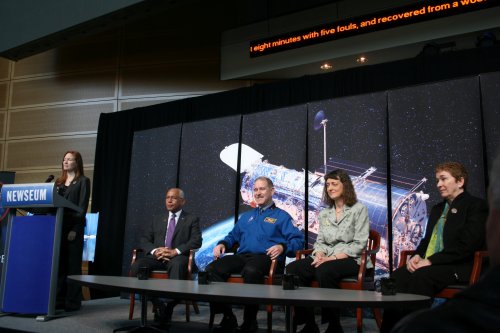 After getting mic’d up and some basic stage instructions on what was going where and who was going up to speak when, we got the usual call of, “We’re live in five, four, three…”

That’s some heavy duty personnel for a space cadet like me! You can see the press conference here — I’m in the red shirt near the stage and for the most part they got my good side (the back).

Charlie Bolden has a personal connection to HST – he was onboard the Space Shuttle mission that launched it twenty-five years ago. HST is generating over ten terabytes of data a year and has lasted far longer than it was originally intended to function. That’s in large part due to the five servicing missions by Space Shuttle crews that have rebuilt almost every major system and control on the spacecraft.

HST is now expected to last until at least 2020, barring some sudden, catastrophic failure of a key system. That’s important, because HST’s successor, the James Webb Space Telescope, is supposed to launch in 2018. It would be wonderful if the two telescopes could operate together, reinforcing each other’s observations, for at least a year or two.

Grunsfeld noted that there isn’t anyplace he would rather be than in space. He would go up to ISS in a heartbeat, or on Orion, or to Mars… Bolden just kept nodding agreement.

Once all of the opening comments had been made, the big reveal was done by Bolden and Grunsfeld. This new image is a star cluster called Westerlund 2, showing about 3,000 stars embedded in a nebula about 20,000 light years away.

Go see the new image in as much resolution as you can get (a 80″ 4K ultra-high-def monitor will work just fine), and also watch the 3D animation that’s on that site, showing what it would be like to fly through the cluster. Granted, you would have to fly through it at several thousand times the speed of light for it to look like that, and then it wouldn’t look like that because it would be blue-shifted in the X-ray spectrum, and NASA isn’t saying that it’s got the technology to travel at several thousand times the speed of light — but you know what I mean.

As good as it looks on your monitor, it’s hard to beat having it over your head on a high-def monitor about sixty feet across, while you’re sitting next to a bunch of shuttle astronauts. (Just sayin’. Yeah, sorry, still squeeeeing a bit inside.)

After the reveal there was a Q&A session. Among the best questions asked and answered was one regarding common public misconceptions regarding Hubble. The answer went to something that I learned long ago in college when I was taking an upper-level course on stellar astrophysics.

We look at all of these images and we see them in bright colors. Some of the images are actually not taken in visible light, but in infrared, ultraviolet, or some other frequency of light. They’re then turned into “color” images based on some scientific and some artistic criteria. Plus, I’m talking about just the images released to the public – some data is just that, data, and never gets turned into an image, or if it is, will be completely false-color for the researcher’s benefit to highlight some aspect of the data or another.

But even for pictures taken in visible light, most people believe that if we could somehow be transported much, much nearer to these objects, they would look to our eye the way that the Hubble pictures make them look, and that’s not true. The other factor involved is how dim these objects are. If you were floating in space somewhere where you could see, say, the Pillars of Creation nebula, you wouldn’t see all of those stunning blues and yellows and oranges. You would see the couple of bright stars in the field, but the clouds of dust and gas would be black, grey, or at best, a faint, foggy white.

The reason that the Hubble pictures look so vibrant (and this is true of any astrophotography of deep space objects, even ones done in the 1950’s by ground-based telescopes or done today by amateur astronomers like myself) is because they collect far, far more photons than the human eye can capture. The pupil of your eye is less than a centimeter across – the HST mirror is over seven feet across. In addition, your eye collects data and sends an image to your brain hundreds of times a second – the HST photos are the result of hours (and in some cases days) of accumulated light collection.

The other great observation of the day came from John Grunsfeld when he noted that Hubble hasn’t discovered a single thing. It’s just a robot, a tool. The people who built it, launched it, and run it are the ones who have made the discoveries and changed the way we look at the universe. An excellent observation, and important to keep in mind.

After the press conference, I got to meet and chat for a brief second with Charlie Bolden, and listened in while he was interviewed by a reporter.

Normally, I’m not one to be asking folks to get my picture taken with them, but in this case I made an exception. I had been talking to Altman and Shriver for several minutes about the future of HST and there had been a steady stream of other NASA Social attendees coming up to get their pictures taken with them. “When in Rome…”

Next, the rest of the day at Goddard Space Flight Center.