Let’s up the difficulty level tonight thanks to celestial mechanics!

The last three nights I’ve been posting pictures of Venus (bright, but fading) and Mercury (dim-ish, never easy to see) as they move close to each other in the evening twilight. I’ve mentioned how it’s a race and a balancing act, trying to wait until it’s dark enough so that dim Mercury isn’t washed out in the sunset sky, while also looking and finding them early enough so they haven’t set.

Tonight the 34-hour-old new moon is moving into the picture, below Venus. Which means that it will be setting before the two planets. In addition, I don’t believe that I’ve ever seen a 34-hour-old new moon. At that point it’s close to the sun, it’s only illuminated on a razor thin line of a crescent, and as a result it’s very dim, even harder to spot in some ways than Mercury.

So, earlier, brighter sky, dimmer object, closer to the horizon – NO SWEAT! Let’s do this!

For reference, last night’s pictures were taken between 20:41 and 20:50. Sunset both nights was about 19:55. But that’s probably too late to see the moon. So this picture was taken at 20:33. Venus is visible. With the naked eye, I could not see the moon or Mercury. But I shot a quick series of pictures anyway, cautious that the moon might be already disappearing.

Then I grabbed the binoculars. Holy guacamole, Batman! Mercury’s there, a bit more distant from Venus than yesterday, higher. But the moon? Stunning. A hair-thin crescent floating just above the trees. Now that you know where to look, can you see them in this first picture? (Click on it to blow it up full sized.)

20:34, and I can just start to see both Mercury and the moon with the naked eye. 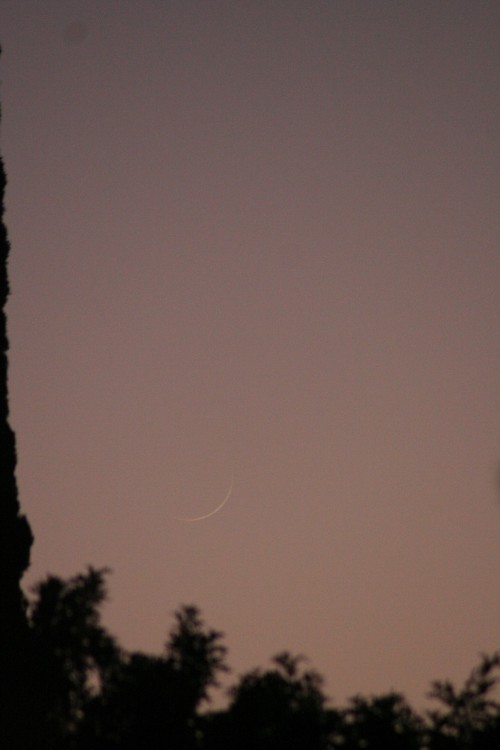 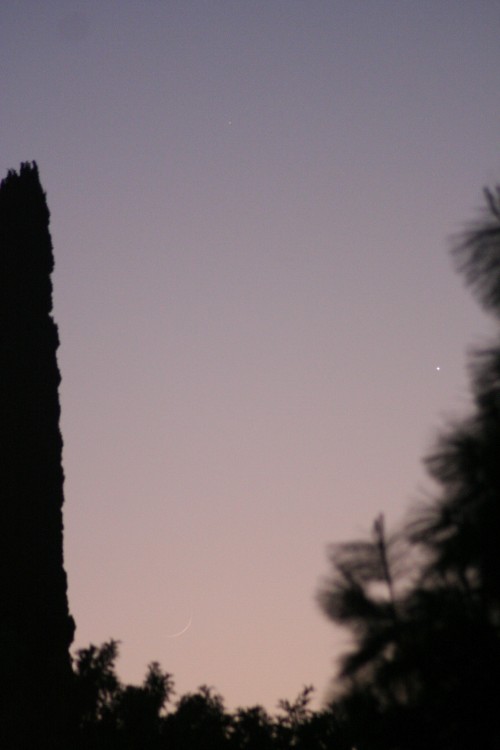 20:36 – getting a touch darker, contrast getting better. Now knowing where the moon is it’s easy to spot. Mercury still dim and hard to spot – it’s right about on the vertical center line of the picture, just above the level of the top of the cedar tree on the left. See it? 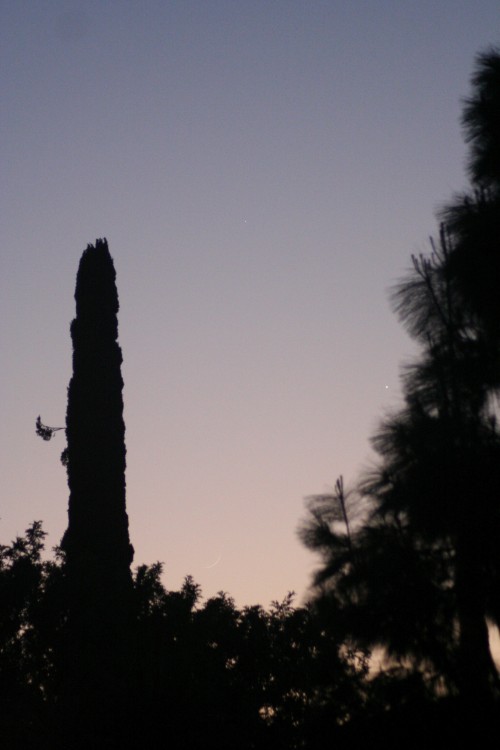 20:37 – the slightly larger picture. For the record, I was using the Canon Rebel XT camera with a Tamron 70-300mm zoom lens. This picture was taken at a 100mm focal length. Pictures #1, #2, and #4 were at about 130mm, and #3 (the closeup of the crescent moon) was at 300mm. Each of these pictures is the best of a bracketing set starting at about 1/2500 second and going through about 1/4 second. In this twilight, the short exposures are really dark, the long exposures are totally washed out and bright, but in between lies the promised land. There are about 12-14 pictures in each set and it takes about sixty seconds to shoot it and set up for the next set. 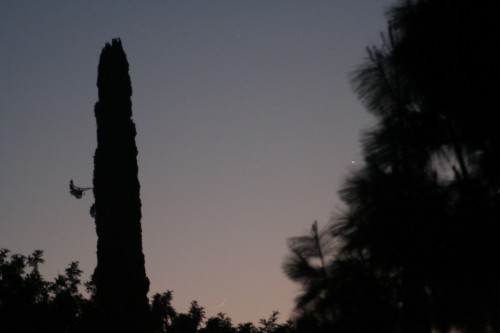 20:39 – the best picture of the night! About to start losing objects behind trees, but it’s finally dark enough to see them all! We’re winners!

20:40 – remember when I said that last night’s range of 20:41 to 20:40 probably wouldn’t work? Good planning! Say goodnight to the moon! Ditto for Venus, Mercury, and the mosquitoes! (I don’t know what’s up with the mosquitoes. We rarely have a problem with them, but they’re out in force this year. My hands are covered with bites from the last two nights!)